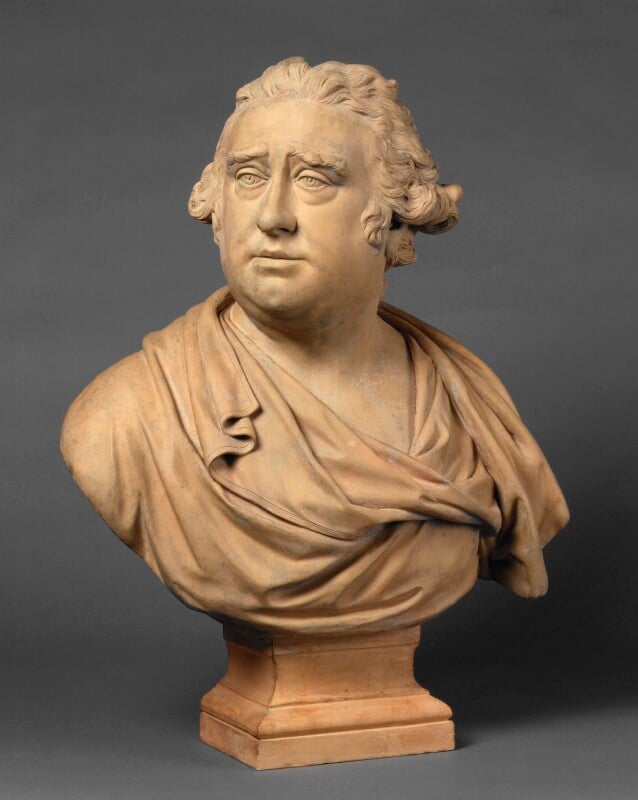 For a general discussion of the almost innumerable Nollekens busts of Fox, see NPG 3887.
NPG 139 is a copy of the first model, the original of which was exhibited RA 1791 (632) and sent to St Petersburg in September 1791 at the request of the Empress Catherine who, wishing to acknowledge Fox’s friendly diplomacy during the Russo-Turkish war, placed it in the Hermitage Museum (where it remains), while a bronze cast, taken in 1792, was placed between busts of Cicero and Demosthenes in the colonnade gallery at Tsarskoye Selo. [1] An engraving of the bust by William Pether, published on 1 January 1792, was dedicated to the Empress. The bust had originally been modelled for the 4th Earl Fitzwilliam’s Mausoleum at Wentworth Woodhouse dedicated to the 2nd Marquess of Rockingham; Fitzwilliam ceded the bust to Catherine and took the second bust, also dated 1791. In 1796 Lord Fitzwilliam gave Mrs Armistead another example of this bust (currently on loan to the NPG).
The many other examples of this model, include those at Holkham (made for Thomas Coke, dated 1792) [2], the Yale Center for British Art (B1977.14.16; made for Lord Robert Spencer, 1792), Howick Hall (made for the 2nd Earl Grey, 1792), in a private collection (made for the 3rd Lord Holland, 1793), with the Thirlestane Castle Trust (1793), in the Walters Art Gallery, Baltimore, and in the Philadelphia Museum of Art. Several busts, including that given to Mrs Armistead in 1796, had inscribed on the socle a quatrain by Richard Fitzpatrick, Fox’s brother-in-law.
A marble copy by E. H. Baily dated 1832 is in a private collection, and a bronzed plaster is one of several copies in Brooks’s, London.