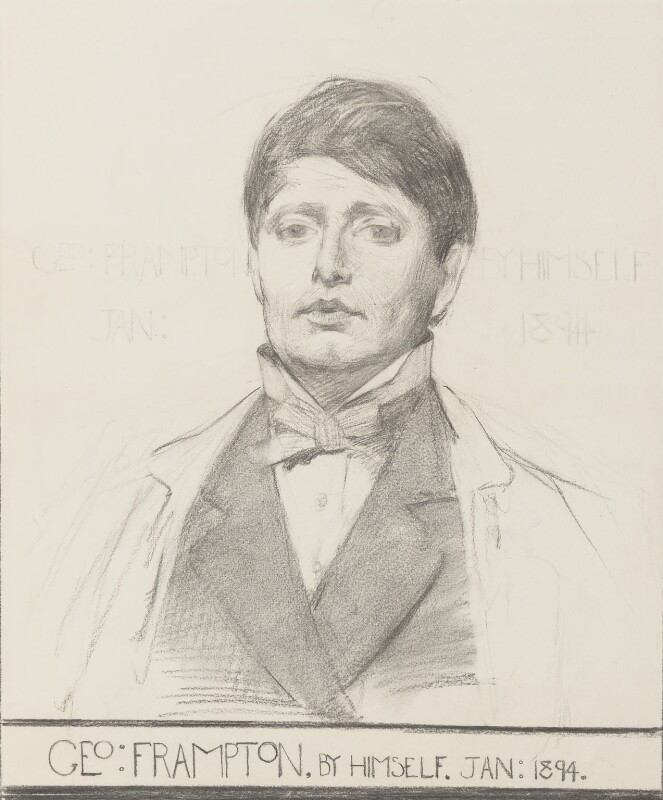 Inscr. full-width between rules below drawing: ‘GEO: FRAMPTON BY HIMSELF / JAN : 1894’;
and same faintly across centre.

This is a confident self-portrait made at the start of a notable year for the artist. The same month he was elected ARA, at age 33, and following his marriage in 1893 to painter Christabel Cockerell, their only child Meredith was born on 17 March 1894.

Frampton is dressed in the same manner as seen in the photograph attributed to L. Lowe (see ‘All known portraits, Photographs, 1896’).

With its inscription the drawing deploys a format popular in Arts and Crafts circles, based on Renaissance models. Reproduced in the February 1894 issue of the Magazine of Art, the drawing was probably executed at the request of Marion Harry Spielmann, editor from 1887 to 1904.

The drawing was acquired from Spielmann together with several other works and a large amount of reference material (the Spielmann Gift 1939). Self-portraits by William Shakespeare Burton (NPG 3042), George Clausen (NPG 3041), George Harcourt (NPG 3045), Phil May (NPG 3038) and Solomon Joseph Solomon (NPG 3044) were also in the Spielmann Gift to the National Portrait Gallery.