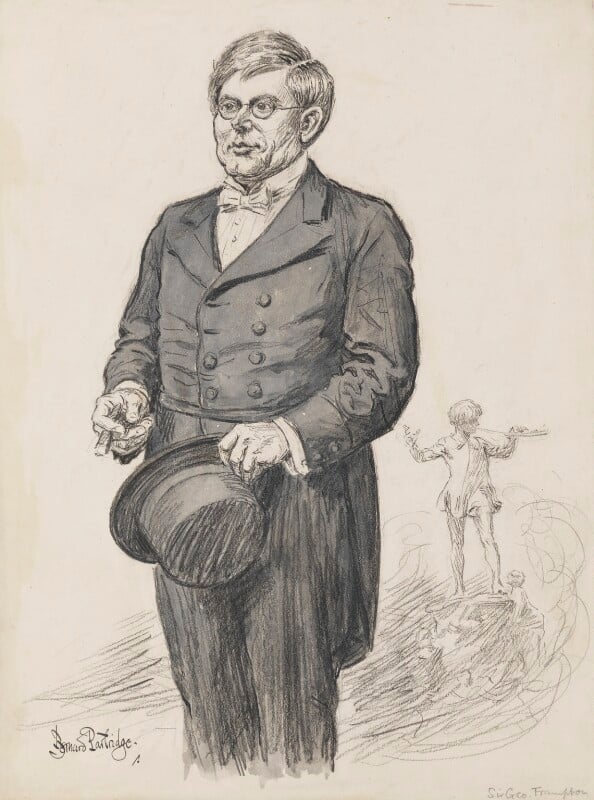 This is no.xxxiv in the series ‘Mr Punch’s Personalities’ drawn for the magazine. It was published on 19 January 1927 with an accompanying verse locating the sitter firmly within the Victorian art tradition:

Let those who make of ugliness a god earn
The praise of modern lips for being modern;
That touch of old-time grace I more admire
Which stamps alike your art and your attire.

If drawn from life, the image was presumably sketched at an official function; the sitter was aged 67. It endows Frampton with a more benign expression than is seen in contemporary photographs and a more rumpled dress sense, comparable to that of Harry Furniss’s undated caricature for the Garrick Gallery (see ‘All known portraits, By other artists, c.1920’). Owing to Partridge’s engagingly loose line it also undercuts the impression of a solid, almost menacing physical presence conveyed by other portraits of Frampton. To remind readers of his claim to fame, the artist included a sketch of Frampton’s best-known and best-loved work, Peter Pan (1909–11, Kensington Gardens; cast, 1929, Sefton Park, Liverpool), the bronze statue commissioned by J.M. Barrie to immortalize the young hero of his popular Christmas play.

Bernard Partridge was a prolific cartoonist and illustrator who worked for Punch from 1891 under the editorship of (Edward) Linley Sambourne, becoming principal cartoonist in 1910 and contributing until 1945. ‘[O]ften spoken of by his colleagues as one of the last of the Victorians’,[1] by 1927 he perhaps felt a generational sympathy with the sitter. According to E.V. Knox, a later editor of Punch, ‘his likenesses were excellent’.[2]

Seventeen of Partridge’s portraits are in the National Portrait Gallery Primary Collection – including those of Alfred Gilbert (NPG 4076), John Lavery (NPG 3671), William Llewellyn (NPG 5064) and Edwin Lutyens (NPG 3672 and 5429) – together with many others in the Archive Collection. This drawing of Frampton was purchased from the artist’s widow in 1949 with 14 other works.

The artist, from whose heir purchased 1949.