1 of 8 portraits of Benjamin Franklin 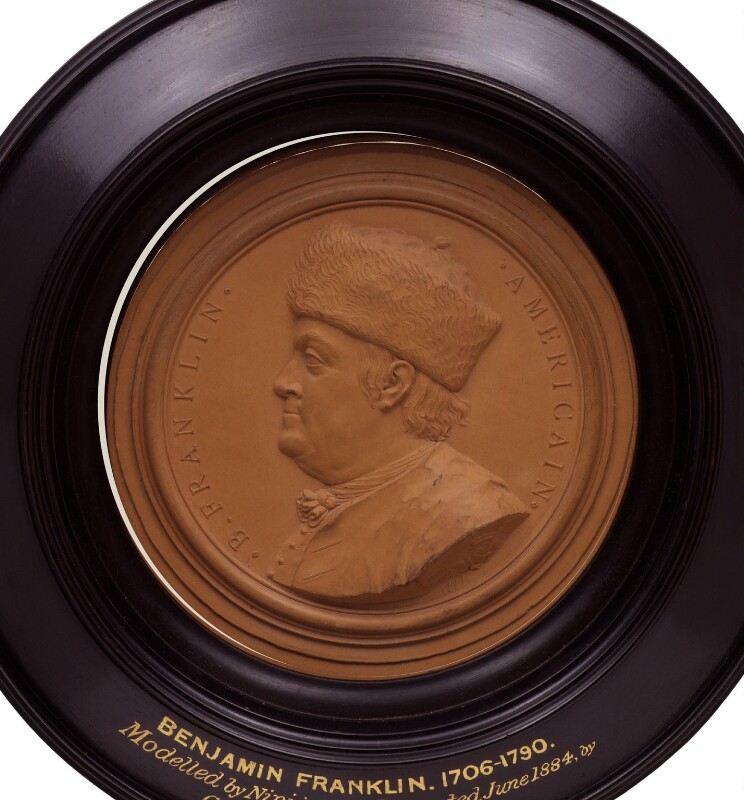 Incised on the truncation: NINI F 1777 with an armorial device, a coronet (‘une couronne de fantaisie’) above a shield displaying a hand holding a rod drawing lightning; lettered: .B.FRANKLIN. AMERICAIN. and 1777

Showing Franklin soon after his arrival in Paris: ‘my thin grey hair peeps out from under my only coiffeur, a fine Fur Cap, which comes down to my Forehead ... Think how this must appear among the Powder’d Heads of Paris! I wish every gentleman and Lady in France would only be so obliging as to follow my Fashion’. [1] The fur cap, which Nini had heard of but not seen, was copied from an engraved portrait of Rousseau, [2] the profile from a drawing by the amateur artist Thomas Walpole. On 11 December 1777 Franklin told the artist’s father, ‘From a sketch ... which was drawn by your ingenious & valuable Son, they have made ... Medallions in terre cuit. A Dozen have been presented to me.’ [3]
The medallion was mass-produced, Storelli describing it as being ‘éxpedié par milliers en Amerique’; undelivered consignments were discovered in the 19th century at the Château de Chaumont where the Leray factory, of which Nini had been manager, had been located. [4] The medallion was also produced in a smaller size (diameter c.9cm.), [5] and was copied by Wedgwood. [6] A much rarer type by Nini differs only in the addition of Franklin’s spectacles, [7] and another of 1777 adds a ‘bonnet de liberté’. [8] In 1778, when Franklin became an accredited foreign representative at the French court, a more orthodox image was deemed desirable, and hat and spectacles disappeared.

Bust to left, wearing a fur hat over his own hair.

J. Hopwood; W. Grainger; J. Heath (from a medallion in the possession of Dr. Lettsom).