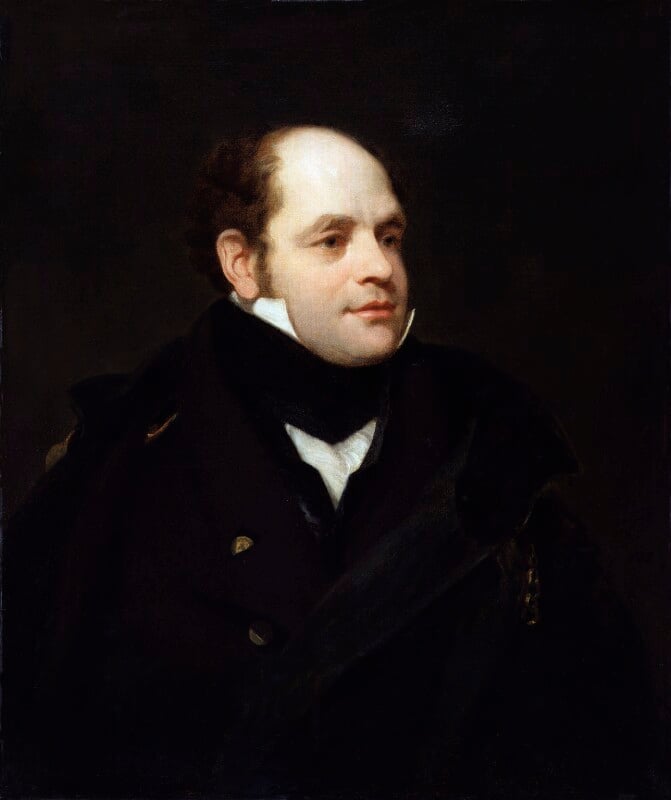 The NPG portrait appears to be a replica of the portrait in the City Museum and Art Gallery, Birmingham, [1] presumably that listed in the artist's 'Sitters Book', under 1824, and exhibited RA, 1825 (98). The Birmingham picture was exhibited Birmingham Society of Artists, 1829 (4), acquired by the Society in the same year, and presented by them to the Art Gallery, 1867 [2]; the picture was also exhibited Pageant of Canada, National Gallery of Canada, Ottawa, 1967-8 (151), reproduced in catalogue. In the VE catalogue, the NPG portrait was said to have been painted in 1824, presumably because Miss Cracroft believed it to be the original portrait presented by Franklin to his first wife as a wedding present in 1824, although it is clearly dated '1828'. The Birmingham version is, however, unsigned, and seems to be of inferior quality. It is possible that Phillips became dissatisfied with the original, and repainted the portrait in 1828, giving the new version to Franklin (his first wife was dead by this date), and taking back the old, or he may have retouched the NPG portrait in 1828, and signed and dated it in that year; in this case the Birmingham portrait would be the secondary version.
Another version of the portrait, apparently by Phillips, was in the collection of H. H. Phillips of Birmingham in 1932. Copies are at the National Maritime Museum, Greenwich, the Dudley Art Gallery, the Scott Polar Institute, Cambridge (in water-colour), the Royal Geographical Society, London, and the collection of T. Johns, 1890, recorded by G. Scharf, Sir George Scharf's Trustees' Sketch Books (NPG archives), XXXV, 64. A portrait called Franklin (apparently wrongly), and attributed to Phillips, is in the National Gallery of Canada. There is an anonymous engraving after the NPG Phillips (example in NPG).

1) See Catalogue of Paintings, City Museum and Art Gallery, Birmingham (1961), p 114.
2) Details of the 1829 Exhibition were kindly supplied by the secretary of the Royal Society of Birmingham Artists, Mr Priddey.

1 Although the portrait was among the Arctic portraits bequeathed to the NPG by Miss Cracroft, who inherited them from Lady Franklin, Sir John's second wife, it was apparently in her possession only by permission of the legal owners, Eleanor and John Phillip Gell (Eleanor was Franklin's daughter by his first wife, Eleanor Anne, née Porden). William Gell, their son and the grandson of Franklin, during an interview at the NPG, 22 January 1932, and in a letter of 1 February 1932 (both NPG archives), explained that the Phillips portrait was painted in 1824 for Mrs Eleanor Anne Franklin, remaining part of her estate, in which Franklin, after her death in 1825, retained only a life interest. When he failed to return from his third Arctic expedition, and was assumed officially dead by the Admiralty, Lady Franklin sponsored search expeditions, largely financed with money from this estate. But, by a Chancery ruling (confirmed later by evidence of Franklin's death), the estate, including the portrait, passed to Eleanor, now married to the Rev J. P. Gell. She allowed it to remain in Lady Franklin's house, with all the other Arctic portraits; it was not returned as agreed, however, when Lady Franklin died in 1875, but was retained by Miss Cracroft. Despite the Rev Gell's request (Eleanor died in 1860) that, by way of compromise, she present it to the NPG, the portrait was not given until 1892, when Miss Cracroft included it as though part of her own bequest. William Gell's account, although probably true, still fails to explain why the NPG portrait is dated '1828'.