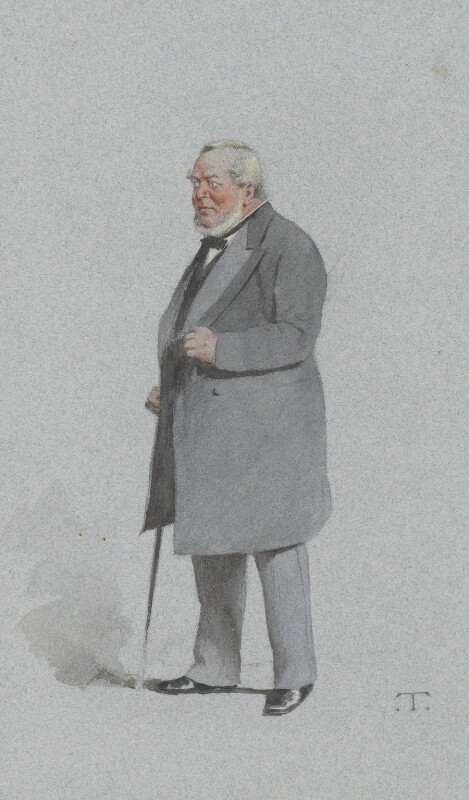 This portrait was published in Vanity Fair shortly before the sitter’s sixty-ninth birthday. It was captioned ‘the eminent builder’ but whilst the depiction acknowledges Freake’s social standing, it also draws attention to his physical presence. Beneath the smartly tailored frock coat is a substantial frame. The inclusion of his walking stick, on which he leans his weight on the right-hand side, further underlines the bulkiness of his body. His neck is thick and his features are blunt, with large staring eyes under bushy brows. The meaty hand extending from his sleeve to clutch a pair of dainty spectacles is sturdy, workmanlike. The artist has taken great care when portraying his subject. An examination of NPG 2574 reveals a sensitive deployment of line and a close study of varying flesh tones, none more effective than the deep flush of the cheeks and even the tips of the ears, which imparts a distinct sense of ‘ruddiness’ to the face. Unfortunately these subtleties are somewhat lost during the reproduction process; in the published chromolithograph the skin of the head and neck is a more uniform pink colour.

The contemporary reader would have noted these pictorial intricacies and recognized that Freake’s place within late 19th-century society was qualified by his being a self-made man. In his accompanying paragraph ‘Jehu Junior’ (Thomas Gibson Bowles) almost anticipates this sentiment and peppers his text with phrases attesting to the good character of the sitter, including ‘very worthy’, ‘public-spirited’, ‘good-natured’ and ‘very respectable’. By the 1880s Freake was indeed eminent and wealthy. Yet he had come from very humble beginnings. His father was a coal merchant and pub landlord from Pimlico. Freake trained as a carpenter but with the assistance of his father soon branched out into building. In a sketch for Punch of a similar date, (Edward) Linley Sambourne emphasizes this distinction in a less gentle manner than Chartran (see ‘All known portraits, Paintings, drawings, sculptures and prints, publ. 1882’). Published in the year that Freake received his baronetcy, the sketch caption reads ‘A Freake of Fortune’, whilst the man himself is shown perched at the top of a builder’s ladder clutching a trowel in his left hand, and in his right what appears to be a tankard of beer with an inscription reading ‘The Bricklayer’s Arms’. Freake, however, remained proud of his origins and retained his cockney accent, apparently encouraging his genteel second wife to adopt it. [1]

Théobald Chartran began to draw for Vanity Fair in 1878, taking the place of fellow Frenchman James Jacques Tissot. During his association with the magazine in the 1870s and ’80s, he contributed over 50 portraits. In 1884 he left London to pursue a career as a society portraitist in Paris and New York. [2] The watercolour was purchased, with 40 other sketches for Vanity Fair, in 1933 from the Fulham art dealer Thomas Cubitt, who submitted them to the National Portrait Gallery for inspection. This was the first batch of drawings of this type to be acquired by the NPG. [3]