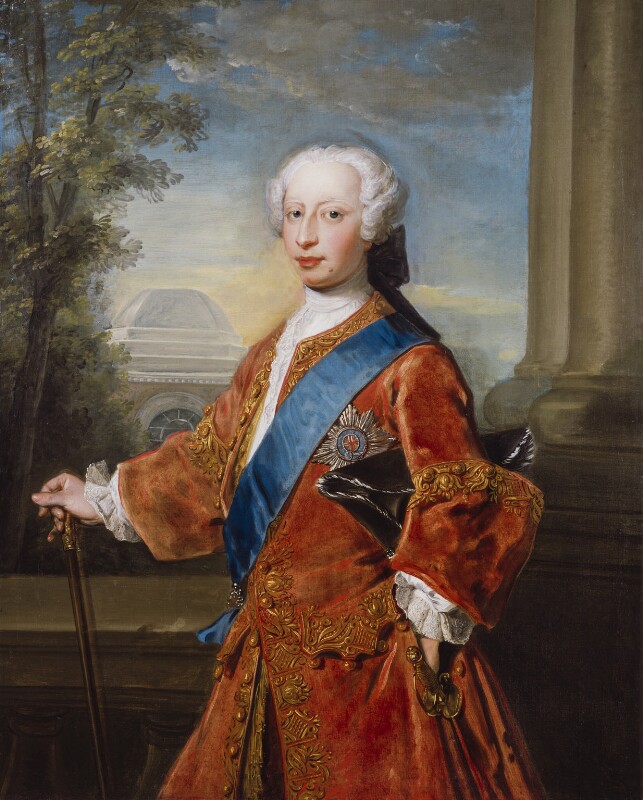 Signed in brown, faintly, on the base of the column in cursive, Ph. Mercier fecit.

An undated portrait of which no other versions are known. The Prince appointed Mercier painter, page of the bedchamber and librarian in 1728, having apparently last paid him as librarian in the year ending 1738. [1] The position as painter was discontinued by warrant dated 7 October 1736 when John Ellys became 'principal painter in the room of Philip Mercier Esq'. [2] The costume suggests the mid- or late 'thirties. A whole length by Mercier painted in 1728 was given by the Queen to Earl Grantham the following year. [3] It was one of a set with the Princesses Anne, Amelia and Caroline, the last signed and dated 1728, all presented in 1768 to the Shire Hall, Hertford, from the collection of the 3rd Earl Cowper at Panshanger. Although the head is in the same pose as NPG 2501, the face is much younger and thinner, close to the half length portrait of 1730 engraved by J. Simon (J. Chaloner Smith, British Mezzotinto Portraits, 1878-83, 65-66). An example is in the possession of Lord Brownlow and a copy, in the Royal Collection (O. Millar, 'Notes on the Royal Collection - I’, Burlington Magazine, CIII, 1961, 525). It is unlikely that NPG 2501 would have been painted without a sitting.

Pentimenti along the top of his right arm and also, still visible in its earlier position, on his right hand which has been extended outwards by the width of his stick; fading or discolouration in the reds of the coat, especially in his right cuff; minor losses, bottom right; pin holes; the relining canvas is now rather dry; cleaned 1970.