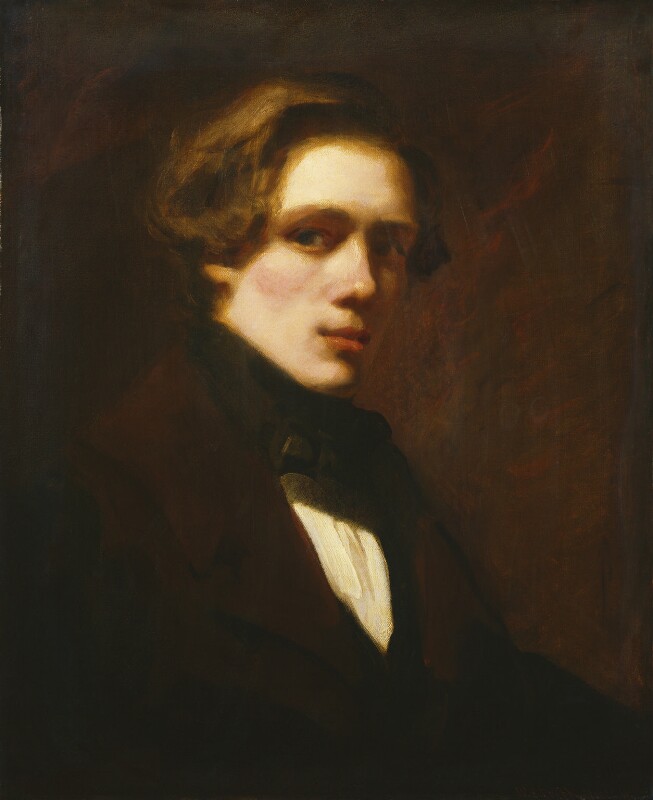 ‘The student need never be at loss for a model, so long as he possesses a looking-glass,’ wrote Frith. ‘In my youth … I spent hour after hour staring into a mirror.’ [1] Although he also claimed that his own likeness had ‘defied me over and over again,’[2] the number of self-portraits in his oeuvre, and especially those included in subject pictures, testifies to this lifelong practice.

When a friend drew his attention around 1883 to this self-portrait for sale in a ‘shabby gallery behind a shop’, he had no recollection of parting with it by sale or gift, nor could he discover its subsequent history.[3] But in his autobiography he confidently stated that it had been painted in 1838, when he was a student aged 19. [4] This was the year of his exhibition debut,[5] when his address was 6 Charlotte Street. Later that year he spent several months painting portraits of gentlemen farmers in Lincolnshire.

This work is equally confidently painted, in a suave and economical manner. It does not appear to have been re-worked. The donors, two of Frith’s daughters, regarded it as ‘very good and far superior’ to NPG 1738.[6]

Three other works may be compared with NPG 2139 (see ‘All known portraits’). The first is the half-length attributed to his fellow-student Douglas Cowper, which was begun at the end of 1836 and is a less searching portrait; in the present work Frith has given himself a touch of Romantic intensity. Second is Frith’s youthful self-portrait in historical costume, as if posing for one of his own subjects (see ‘All known portraits, Self-portraits, c.1838’). Third is the watercolour by William White Warren, which closely replicates NPG 2139.

Early history unknown; bought from shop by the artist c.1883 and in family possession until 1927 when presented by his daughters.

A Festival of Britain Exhibition of Paintings by William Powell Frith, R.A. 1819–1909, Harrogate Corporation Art Gallery, 1951 (1, as ‘Portrait of the Artist as a Young Man’).