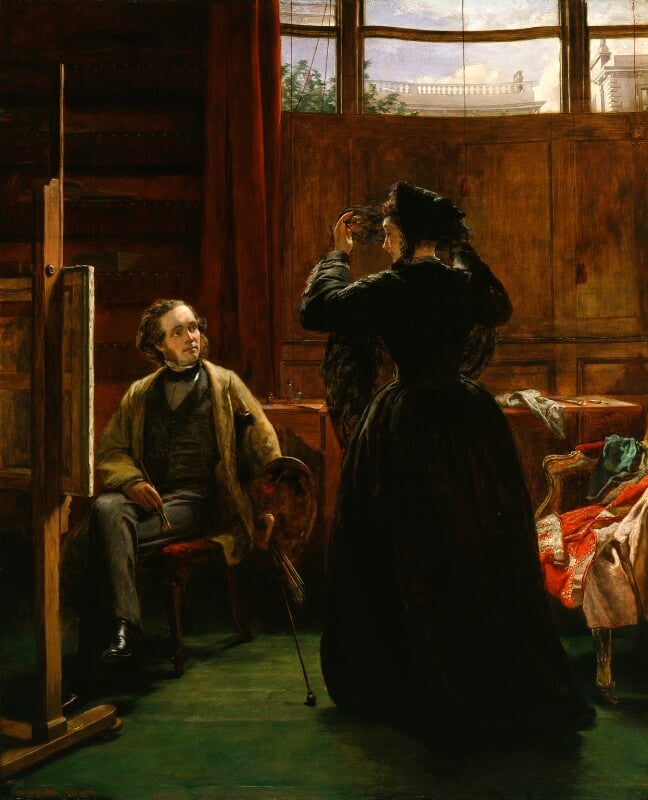 ‘From my youth up I have been, and ever shall be, sensible to the charm of female beauty,’ wrote Frith at the age of 67,[1] and throughout his career a favourite motif was that of artist and female model, seen very comparably in The Artist and his Model of 1860.[2] Here, Frith shows himself ready for work in his studio at 10 Pembridge Villas, west London, as a fashionably dressed visitor raises her outdoor veil. Is she a model, however? Frith’s frankly appraising gaze and the historical costumes draped on the chair suggest such a role but, as her identity is not declared, the scene has ‘a deliberate air of mystery’ and we see only ‘a pretty young woman dressed in black ... revealing her identity to the privileged gaze of the artist’.[3] She could be either a model or a portrait sitter. If the former, her mourning attire may suggest pathos in the form of loss of a breadwinner; if the latter, it is hard to reconcile a new portrait with recent widowhood.

The ambiguity may be intentional, if we link the woman portrayed with the purchaser of the painting, Thomas Rousby, who was father-in-law of Clara Marion Jessie Rousby, ‘a most beautiful creature [and] actress of merit’, who sat for several of Frith’s pictures in the early 1870s.[4] Though only partially seen, the figure and features of the woman in NPG 1738 are consistent with those in photographs of Clara Rousby (see NPG x22106, NPG x29193 and NPG Ax18159). She married actor-manager William Wybert Rousby in Plymouth in January 1867 aged 18. Frith first met Clara in London sometime in spring or summer of that year, before she appeared on the stage. ‘I shall never forget the vision of beauty that burst upon us when she entered the drawing-room at Pembridge Villas on her first visit here,’ he recalled, adding that ‘those who saw her afterwards can have but a faint idea of her extraordinary beauty as a young girl.’[5]

This account indicates a social call, presumably with Rousby snr, a London businessman who was ‘a great admirer and personal friend’ of the artist and was the first owner of the work.[6] It appears that he agreed to purchase a self-portrait by Frith, which (if the woman’s identity is accepted), would also include his attractive new daughter-in-law, seen obliquely. The price was £200. It is not known if she or her husband were recently bereaved, or whether Frith chose to portray her in black for pictorial reasons. Dress and pose also emphasize the figure’s trim waist.

Clara Rousby made her acting debut at the end of 1867 in Manchester,[7] and some months later Frith’s recommendation of husband and wife to dramatist Tom Taylor led to their London debut in December 1869.[8] This in turn furnished Frith with dramatic-historical subjects, including the successful Amy Robsart featuring Clara ‘half sitting, half reclining upon a pile of Moorish cushions’ (RA 1870 (908)) and Mrs Rousby as Princess Elizabeth in ‘’Twixt Axe and Crown’ (RA 1870 (364). The artist therefore both assisted and benefitted from her theatrical success. Like others, he regretted the later loss of her ‘supreme loveliness before she entered upon the stage life’ and her premature death from tuberculosis.[9]

The work entered the National Portrait Gallery collection from the husband of Thomas Rousby's granddaughter (whose exact relation to Clara is unknown but cannot have been her daughter) soon after Frith’s death, the ten-year accession rule being waived. It was not admired by Frith’s daughters, who suspected it was not all his own work;[10] no reason was given, and it may be that the suggestive depiction of their father, then in his fifties, alone with a young woman, reminded them of the unwelcome revelation of his other family, whose mother Frith married in 1881.

Purchased from the artist by Thomas Rousby; by descent to his granddaughter Mrs G.M. Marriott, from whose husband purchased by NPG.

Charles Dickens: An Exhibition to Commemorate the Centenary of His Death, V&A, London, 1970 (P26).