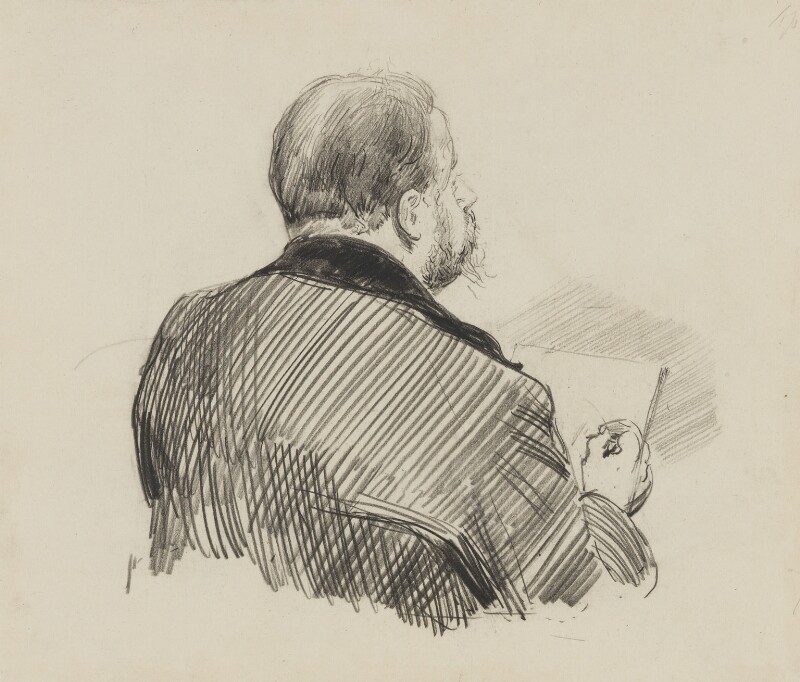 This quick sketch, published with the title Mr Harry Furniss sketching in Court, is an example of ‘the biter bit’, in the sense that Furniss is depicted in the act of drawing by a fellow graphic journalist, and to some extent competitor. It was executed at the Royal Courts of Justice during the Parnell Commission, which sat intermittently from September 1888 to March 1889. As parliamentary illustrator for Punch, Furniss had an interest in the proceedings, although he was not a regular attender. When the Commission reached its climax, another Punch illustrator depicted the crush in the press box, with reporters’ elbows in each other’s ribs, alongside humorous accounts of court procedure.[1] The text chronicling 12–13 March mentions ‘the artists of the illustrated papers’ attending the court, one being ‘an Englishman born in Dublin’, which doubtless alludes to Furniss.[2] The same page carries a sketch initialled by Furniss, confirming that he was in court on this occasion.

Sydney Prior Hall (see NPG 4405) was specially appointed to cover the Parnell Commission for the Graphic. According to the Art Journal, ‘he was in court the whole time, busy with a swift revealing pencil which missed no turn of affairs’.[3] The result was ‘his biggest triumph … a chronicle of over two hundred brilliant pencil drawings’,[4] many of which were published in a special issue of the Graphic on 11 March 1889.[5] Others, including this back view of Furniss, appeared in a later issue, wrapping up the season’s most compelling political event. Hall’s drawings of Commission witnesses and spectators have been described as ‘quite outstanding’[6] and are discussed at length in Cullen 2004 (pp.190–98) and Cullen & Foster 2005 (pp.45–50).

NPG 2386 was published in April 1889; two years later Hall exhibited a now-unlocated portrait of Furniss at the Royal Society of Portrait Painters (see ‘All known portraits, By other artists, 1891’).

It was acquired from the artist’s son with 86 assorted portrait sketches and is one of 146 works by Hall in the NPG collection.

See also NPG Portrait Set 'Miscellaneous drawings: The Parnell Commission, Members of the House of Lords and the House of Commons by Sydney Prior Hall, circa 1886-1903'.

Quarter-length, back view, profile perdu to right, with right hand and sketchbook.