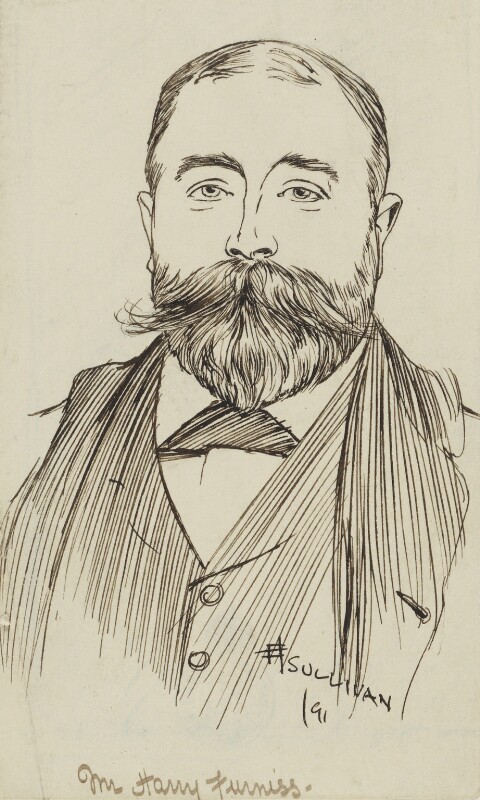 Signed and dated lower right: ‘E.J.SULLIVAN / 91’;
and in another hand along the bottom: ‘Mr Harry Furniss.’

According to the donor, this work was among ‘a lot of original sketches made for publication in the Graphic, Daily Graphic etc’ and was purchased for nine pence.[1]

In fact, the drawing was done ‘from a photograph by A. Bassano’ (see ‘All known portraits, Photographs, before 1892’) and in slightly cropped form was published in the Daily Graphic on a page of portraits with facsimile signatures entitled ‘Mr Punch’s Jubilee Day: the Present Editorial Staff’.[2] All were drawn by Edmund Joseph Sullivan who in 1899 was recruited for William Luson Thomas’s new venture, the Daily Graphic; see also his portrait of George du Maurier (NPG 2899).

Furniss began contributing to Punch in 1880, becoming a regular freelance artist in 1884. Over the years he produced some 2,600 images, notably on-the-spot sketches of parliamentarians, from which developed twentieth-century political caricature. Furniss, who described his Punch activities and colleagues in Confessions of a Caricaturist (1901),[3] left the magazine in 1894 but never surpassed the reputation he gained there. According to Punch’s historian, he ‘achieved for himself a great popularity and unquestionably acquired for Punch a unique position among journals, as representing to the people that personal side of Parliamentary life … the vie intime of the House of Commons not to be found elsewhere’.[4] Among his larger illustrations were a series of ‘Puzzle-Headed People’ which in 1889 featured Charles Stewart Parnell (see also NPG 2386), and a fold-out page, ‘Punch among the Planets’, for Christmas 1890.[5]

Sullivan went on to became one of the leading book illustrators of the period from the 1890s to the 1910s, although his reputation has been eclipsed by Arthur Rackham and Edmund Dulac. For a later work by Sullivan see his drawing of Sir F.S. Maude (NPG 6110).

Offering this and the drawing of Du Maurier to the Gallery, Brigadier-General A.F.U. Green wrote:

They are too good to waste so I send them in the hope that they may be of use to you in your collection of that period. As a matter of interest or curiosity I remember buying them together with a lot of original sketches made for publication in the Graphic, Daily Graphic etc in the early days of photographic reproduction at the flat rate of 9d. apiece.[6]

The two drawings were accepted, given accession numbers and placed in the ‘reference portfolios’.

Head-and-shoulders, full-face, with full beard and moustache, in formal dress.