34 of 641 portraits matching these criteria: 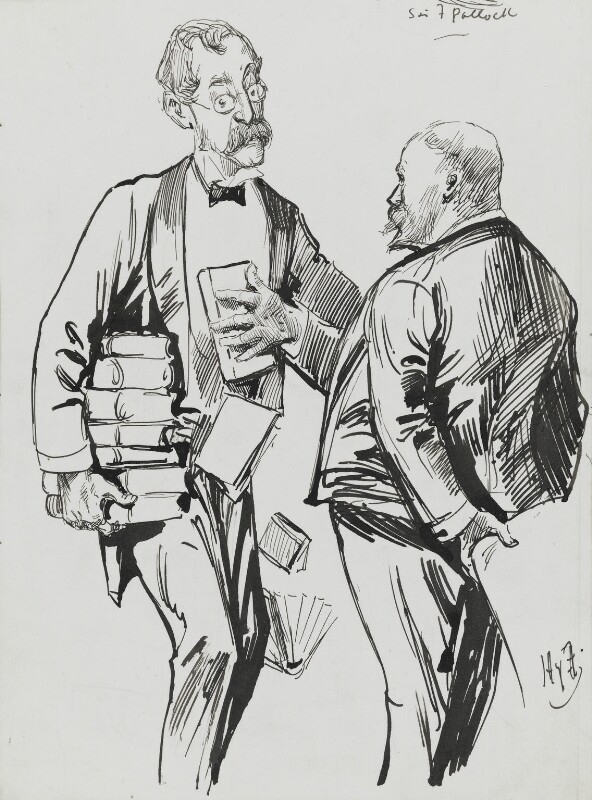 Sir Frederick Pollock was a leading jurist and legal theoretician who published numerous books on the historical principles of English law, was professor of jurisprudence at Oxford 1883–1903 and chief editor of the Law Reports 1895–1935. He also helped draft parliamentary bills and served on ‘blue book’ commissions of inquiry, including that on the condition of labour 1891–4, which was perhaps the occasion of his meeting with Furniss, as recorded here. Furniss was Punch’s parliamentary illustrator during this period, although the caricature may have been drawn at a later date.

Pollock was notable for his ‘immense dignity’ and ‘formidable appearance’,[1] although he also enjoyed humour, with Punch as recommended reading.[2] He is represented here as an abstracted intellectual, fumbling with too many learned volumes, while the caricaturist sketches himself withholding his own work, or the paper in which it appears.

For other portraits of Pollock see NPG 3835 and NPG D20934, which also feature his walrus moustache and round spectacles but endow him with greater gravity than in Furniss’s lively, intentionally irreverent drawing.

Writing of Furniss’s work in caricature, the Art Journal commented that ‘Nobody has wielded the pen, not to say the brush, of criticism more effectively than he, some would say more ferociously. But there is, in truth, little ferocity in the merry band that pipes to the tunes so genially “called” by [the editor of Punch] ….’[3]