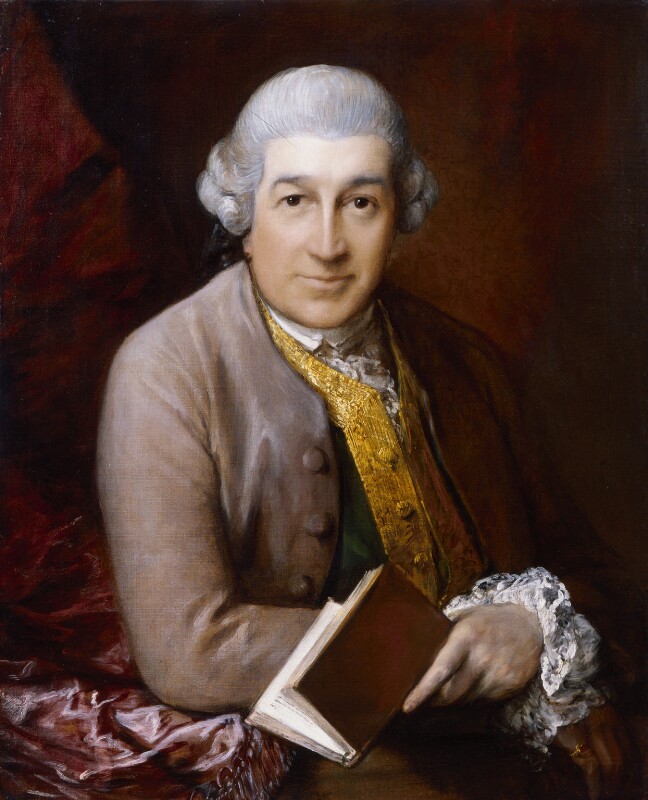 This intimate characterisation within a half-length format may be compared with Gainsborough's contemporary portraits of J. C. Bach, NPG 5557, and John Henderson, NPG 980. When exhibited at the RA in 1770, Horace Walpole remarked that NPG 5054 was ‘Very like’, [1] although Gainsborough, like other artists, did not find Garrick an easy sitter. According to his obituarist in the Morning Chronicle,

'when he was sketching the eyebrows and thought he had hit upon the precise situation and then looked a second time at the model he found the eyebrows lifted up to the middle of the forehead, and when he looked a third time they were dropped like a curtain, close over the eye. So flexible and universal was the countenance of this great player that it was as impossible to catch his likeness as it is to catch the form of a passing cloud.' [2]
On 22 June 1772 Gainsborough told Garrick his portrait was to go from Bath to London 'on Wednesday next' and asked pardon for having kept the picture so long from Mrs Garrick:

'It has indeed been of great service in keeping me going, but my chief reason for detaining it so long was the hopes of getting one copy like, to hang in my own Parlour, not as a show Picture, but for my own enjoyment, to look when I please at a Great Man, who has thought me worthy of some little notice; but not one copy can I make which does not as much resemble Mr Garrick's Brother as Himself - so I have bestow'd a drop of excellent Varnish to keep you out, instead of a falling tear at parting and have only to beg of Dear Mrs Garrick to hang it in the best light she can find out, and to continue puffing for me in the manner Mr Keate informs me She does - That you may long Continue to delight & surprise the World with your Original Face whilst I hobble after with my Copy.' [3]

It is assumed that NPG 5054 was the portrait sent to Mrs Garrick. [4] Gainsborough's own copy remains unidentified. A second copy was made for Garrick’s business adviser, James Clutterbuck; [5] in a second undated letter Gainsborough told Garrick 'I will never consent that any body makes a present of your Face to Clutterbuck but myself, because I always intended a Copy (by my own hand) for Him' adding 'and for the Original, it was to be my present to Mrs Garrick'. [6]
In 1859 Scharf noted that NPG 5054 was superior to a version in the Schomberg collection (sold by Paul Mellon, Sotheby’s, 11 November 1981, lot 184); [7] other versions were formerly at Tockenham Manor; [8] sold Robinson and Fisher, 16 May 1928, lot 162, and on the London art market in 1969.
A miniature copy by William Essex was sold Christie’s, 18 December 1973, lot 62, and enamel copies by him were exhibited at the RA 1857 (656), Society of British Artists, Suffolk Street, London, 1858 (816) and RA 1860 (856).[9]