9 of 56 portraits of David Garrick 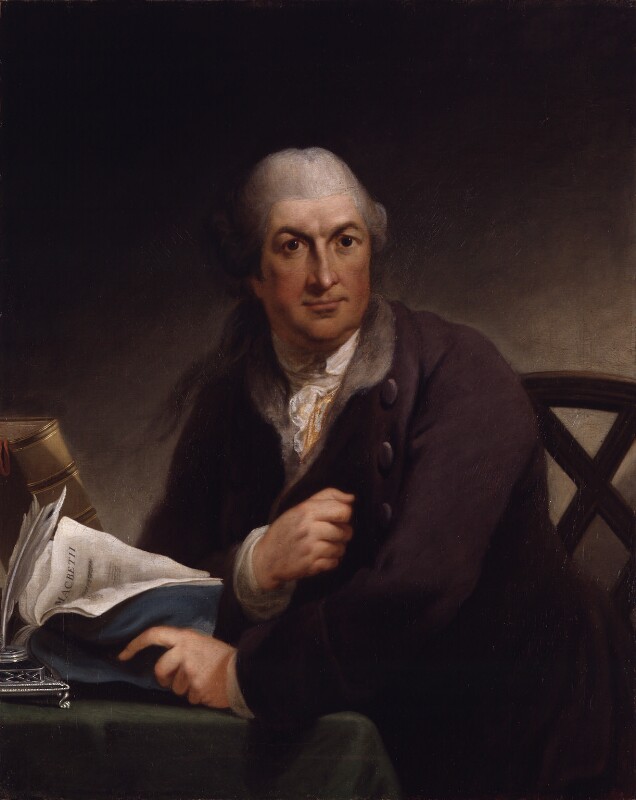 NPG 82 has some claim to be an original portrait by Pine, although such status should not be overvalued. When sold in 1859 it was said that when Garrick was in Bath

‘Sir R Sullivan saw his portrait in the Artist’s studio & asked leave to have a copy - Mr Garrick refused, but generously offered to sit specially to oblige Sir Rd Sullivan The faithfulness of this likeness is confirmed by rather a romantic incident Mrs Garrick so deciding declared it to be the best likeness of her husband, that once a year during her widowhood, she obtained permission of Lady Sullivan to closet herself for some hours with this picture as the tenderest & most faithful remembrance of her dcd husband!’ [1]
Pine was living in Bath between 1772 and 1779. A reduced copy in pastel is in the Theatre Museum and an enamel copy by William Essex was exhibited RA 1838 (663), possibly that dated 1835 in the Victoria and Albert Museum (938.1868).
The same head recurs in a number of variant portraits of Garrick by Pine, their frequency suggesting ‘a fascination that went beyond simple economics’. [2] They were painted, it would appear, between 1775 and 1780; in July 1775 Garrick paid Pine for two oval burnished gold frames [3] and in 1780 Pine exhibited at the RA a Portrait of Mr Garrick. [4] Apart from NPG 82 seven types of Pine portrait may be identified.
a) Three-quarter length seated to left, table to right, an open book held up in his right hand, the chair with curved back. Engraved by W. Skelton, published 1 November 1818, ‘from an undoubted original Picture in the possession of the Widow of the late George Wilson’. Skelton also engraved in 1818 a miniature of Garrick after Pine (with George Daniels in 1865).
b) Half-length oval, in a blue coat, holding in his left hand across his body a well-thumbed paper-bound text; Folger Shakespeare Library. [5]
c) Half length, in a red coat, his left hand stretched out across his breast; versions in the New York Public Library [6] and in the Garrick Club. [7] This type has been associated, too tenuously, with Garrick’s farewell performance as Don Felix in The Wonder, the gesture recalling his final epilogue. [8] The pose was incorporated in Pine’s whole-length canvas of 1782, Mr Garrick speaking the Ode to Shakespeare (also known as the Apotheosis of Garrick) engraved by C. Watson in 1783. [9]
d) Half length, standing, in a blue coat with a red collar, his right hand held across his body. Garrick Club. [10]
e) Half length, in a blue coat, a copy of Macbeth in his right hand. Versions at Christ Church, Oxford, [11] and sold Sotheby’s, 14 February 1962, lot 172.
f) Bust-length oval, without hands. Versions in the Yale University Art Gallery, at Newbury House, and with M. Sylvester, Canada, 1961.
g) Face mask alone, without hair, engraved anonymously, published on 4 April 1779, giving the semblance of a death mask. [12] Garrick was buried in Westminster Abbey on 1 February 1779.

Brown eyes, white hair, wearing a fur-lined purple coat and a gold and light blue waistcoat; a green cloth on the table.

1 ‘painted for my father - original- and said by Mrs Garrick to be the best likeness ever made’ (Sir Charles Sullivan to Scharf, 9 June 1858; NPG archive).