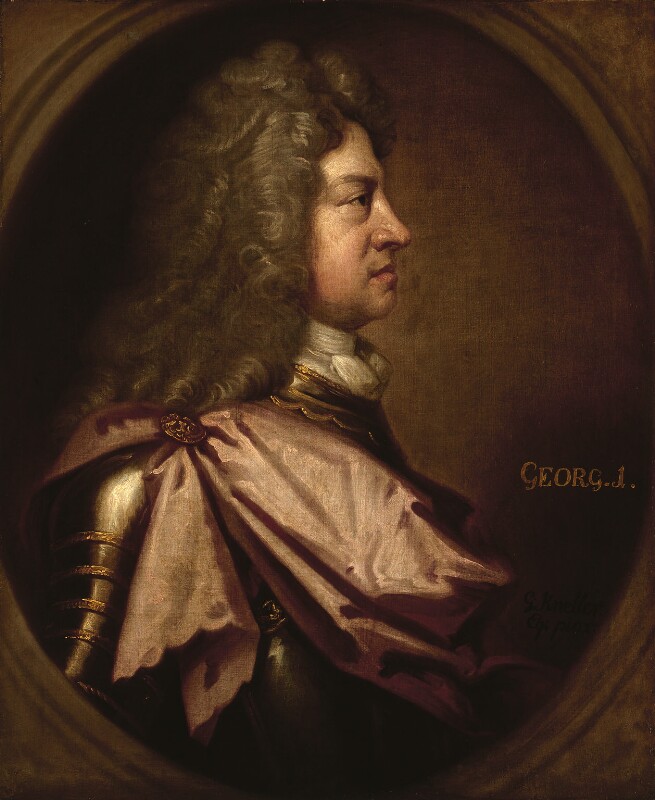 Inscribed in gold, right, level with his chest: GEORG.I., and below, in black, in facsimile of a signature: G.Kneller/Eq: pinx:.

NPG 4223 is probably the best of several versions and if not autograph throughout, was surely produced in the artist's studio. A good version is in the Brunswick collection. Of the two in the Royal collection, the copy at Windsor bought by George IV, recorded first in 1816 at Carlton House, has the longer history (Sir Oliver Millar, The Tudor Stuart and Early Georgian Pictures in the collection of Her Majesty The Queen, 1963, 371). A studio version was listed at Buckingham Palace in 1866 (Sir Oliver Millar, The Tudor Stuart and Early Georgian Pictures in the collection of Her Majesty The Queen, 1963, 359). Another version described as an 'Heirloom from Lady Darlington', [1] belonged in 1908 to Alexander, Count Kielmansegge, descendant of John Adolph, Baron von Kielmansegge, master of the horse to George I. His wife Sophia Charlotte (c.1673-1735), née von Platen, was created Countess of Darlington in 1722. A copy of the portrait in Lord Salisbury's collection at Hatfield has gone under the name of the 7th Earl of Exeter. A miniature copy by B. Lens was sold at Christie's, 11 February 1936, lot 34.
The engraving of the type by Chéreau, the younger, reversed, with ermine edging to the drapery and without the Garter ribbon, included the lettering Inauguratus XX die Octobris 1714. The engraving, therefore, if not the painting, would seem to date from after the coronation. The sitter appears too old for a date prior to 1701, the year he was made knight of the Garter, and the omission of the Garter from the engraving and from known versions of the painting, remains unexplained. The portrait is probably associated with a payment to Kneller, dated 6 May 1715, which included twenty pounds 'for the coin'. [2] A possible date would be between George's arrival in England, 18 September 1714, and the coronation, 20 October.

Slight retouchings on his right cheek; some rubbing outside the chin, which is now thin; a number of dark vertical lines in the wig, and opposite the necktie.