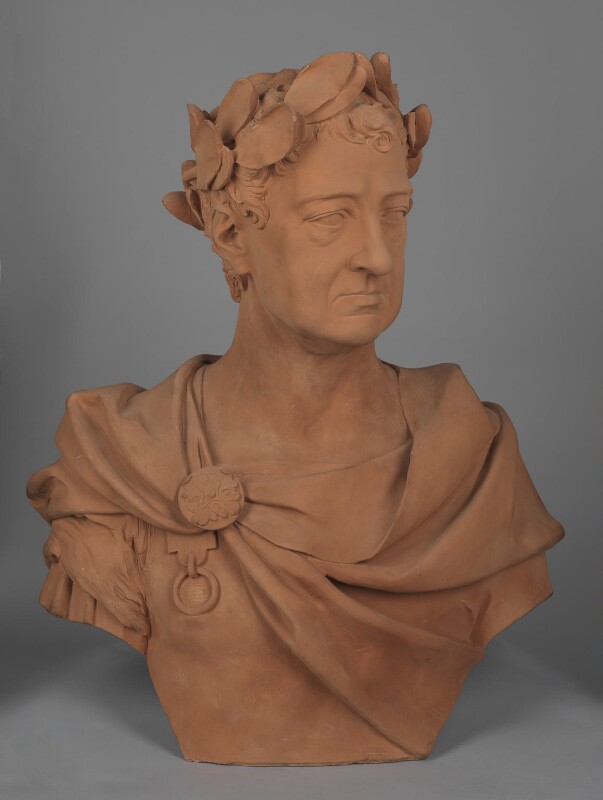 Rysbrack gave a list of his work to Vertue including a 'K. George 1. a Marble'. Vertue noted, 1732, 'the King did not actually set', [1] but it is not clear whether the type is posthumous or perhaps after another portrait. Rysbrack came to London in the autumn of 1720 and his reputation was such as to have justified important commissions from about 1723. A marble bust similar to NPG 4156, but with Garter star, was in the Hall at Christ Church, Oxford, by 1766, [2] and a whole length version, in marble, in the Squire Law Library, Cambridge, was ordered in 1736 and erected in 1739. [3] Another statue, erected in the Royal Exchange, was last recorded as sold, damaged, after the fire of 1838. [4] Two marble medallions by Rysbrack are now lost. [5]

Numerous cracks including one down the centre of the chest; five of the laurel tips are broken and three missing. The glaze may cover a red paint which the sculptor habitually used to produce a homogeneous surface after the infilling of cracks with plaster, the cracks themselves resulting from the firing. [1] The grey glaze is unusual.