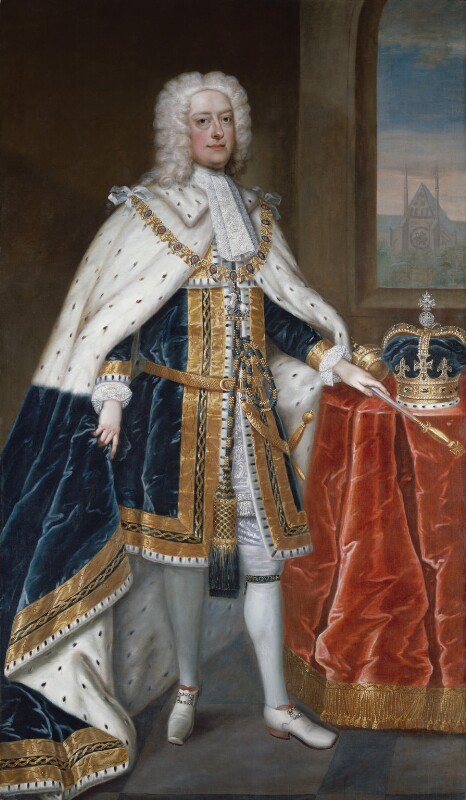 A version of the portrait in the Guildhall Art Gallery commissioned by the corporation in 1727 and noted by Vertue: 'Aug. 1728. The King sat to Mr Jervaise for a picture for the Guildhall'. [1] The type is the coronation portrait intended presumably as the state portrait for the new reign. Soon after the accession Jervas also drew the King and his consort for the (coronation?) medals by John Croker, and Vertue further records that in 1728 the artist was 'imployd. by the Queen to paint the Picture of Prince William. in which proving sucesfull. the Queen sat to him & the King'. [2] The Guildhall commission had been primarily at the instigation of Alderman Barber, and by 1732 Vertue was to note ‘Mr Jervase his Majestys painter has had no success in painting their Majesties pictures & from thence he lost much favour & Interest at Court'. For this reason, it may be supposed, the pair is not in the Royal collection. Other versions of the Guildhall portrait include one at Shire Hall, Hertford, and a copy at Gripsholm, 1950. An equestrian portrait (see All Known Portraits) is also mentioned, the face by Jervas said to be unlike and the horse 'by Wotton'. [3] This must be the portrait at Blickling.

An old damage in the bottom of the robe has been patch-lined; cleaned and revarnished 1957.