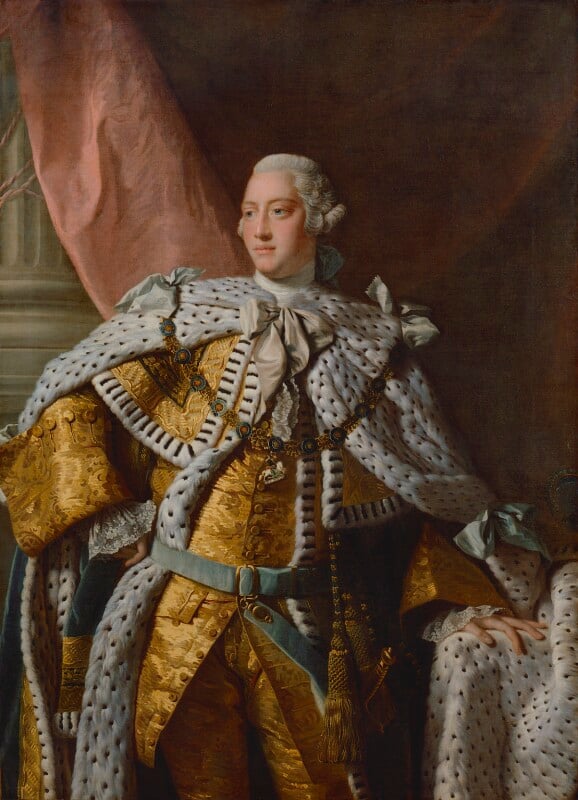 A reduced studio version of Ramsay’s celebrated whole-length coronation portrait which he was working on in December 1761 and had finished by March 1762, when Walpole commented it had been ‘painted exactly from the very robes which the king wore at his coronation. The gold stuff and ermine are highly finished; rather too much for the head does not come out as it ought’. [1] The original portrait remains in the Royal Collection [2] and was engraved by W. W. Ryland in 1767. There are good early whole-length versions, for example, in the Archbishop’s Palace at Armagh, Mount Stuart, Stratfield Saye, and the Guildhall Art Gallery (38).
Ramsay was to be concerned with the replication of his coronation portraits of the King and Queen (see NPG 224) for the rest of his life. Copies were required by the Privy Purse for the Royal residences and by the Lord Chamberlain for ‘Nobility Ambassadors and Governors of Provinces’, which then included the American colonies. Records survive of one hundred and seventy portraits of the King and one hundred and fifty of the Queen; nearly one hundred of each are known today. [3] Although Ramsay told Lord Bute in 1762 that he intended ‘to give the last painting to all of them’, [4] his resolution proved impractical; ‘portraits of His Majesty in every stage of their operation’ came to crowd his studio, eagerly sought by ‘distant corporations and transmarine colonies’ so that ‘with all the assistance he could procure he could by no means satisfy the diurnal demands’. [5] These assistants included David Martin, the young Philip Reinagle, J. G. Eccardt and George Roth, but it is impossible to distinguish their hands; NPG 223 and NPG 224, good early studio versions, were probably finally touched by Ramsay himself.
Ramsay’s portraits were distributed until his death in 1784, by which time the King’s age had doubled from twenty-three to forty-six, and there are rare examples of a 1771 Zoffany head being grafted on to a Ramsay body. [6] Ramsay also painted two half-length profile portraits of the King wearing Court and informal dress.

Blue eyes, white powdered hair, in coronation robes over a damask-patterned gold suit with a blue-grey sword belt, wearing the Collar of the Garter; a pink curtain behind him.