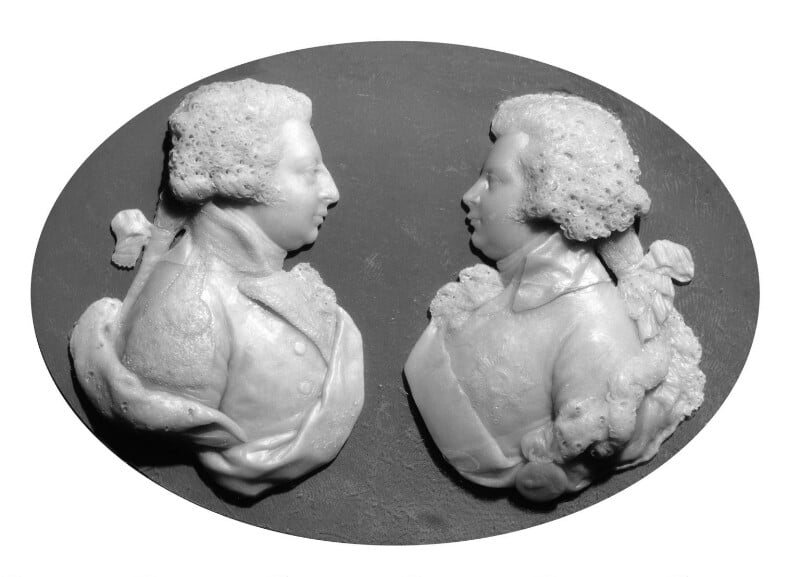 Inscribed in an old hand on the original paper backing (preserved in registered packet): Modelled by T: R: Poole/1795.

Poole who exhibited a model of the Duke of York RA 1799 (1087) and of the Prince of Wales 1800 described himself on trade labels as 'Medallion modeller to his Royal Highness the Prince of Wales' (E. J. Pyke, Dictionary of Wax Modellers, 1973, pp 112-13 who lists eight waxes by Poole of George as Prince and King). If the date 1795 on the NPG wax is correct, apart from the Burke wax of 1791, this is one of the earliest Poole waxes recorded. The Prince of Wales and Princess Caroline were married in the Chapel Royal on 8 April 1795. Poole's wax relief lends point to her cri-de-coeur to Malmesbury on meeting the Prince for the first time - 'Mon Dieu ... je le trouve très gros, et nullement aussi beau que son portrait.' Its early history is unknown until its acquisition by James Jones, a well-known collector of fine furniture in Bath (see a letter from his son-in-law Frederick Jerdein in Country Life, 25 March 1954, p 869).
A circular wax of the Prince alone, signed and dated Poole 1804, was lent by HM The Queen to the 'Kings and Queens' exhibition RA 1953 (257).

Prince of Wales at right in profile to left wearing wig with queue, Ribbon over right shoulder and Badge of Garter; Duke of York at left in profile to right wearing a similar wig, no Orders.

James Jones of Bath and Lechlade Manor, and given by his daughter Mrs Frances E. Jerdein 1946.