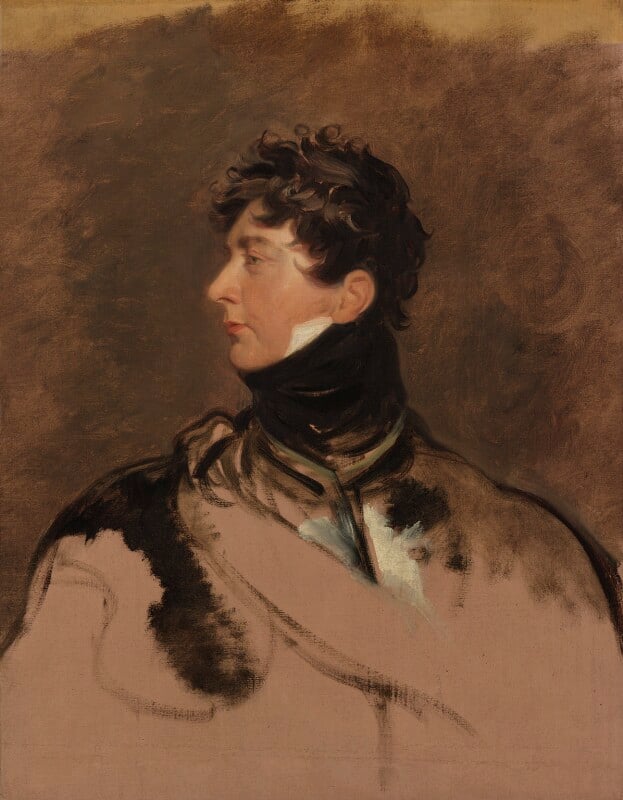 Lawrence is believed to have had several sittings from the Prince Regent who came to his studio in 1814. The original drawing is in Windsor Castle, in black, white and red chalk on prepared canvas, described in A. P. Oppé, English Drawings … at Windsor Castle, 1950, p 71 and reproduced plate 9. It differs slightly from the NPG oil sketch mainly in the set of the head, the treatment of the hair, the position of the ear related to the neckcloth, and in the armour which is clearly defined in the drawing and only indicated in the oil. Nevertheless, as both Oppé and Garlick say, the oil sketch is based on the drawing. Three other drawings are listed by Kenneth Garlick, ‘Catalogue of Paintings, Drawings and Pastels of Sir Thomas Lawrence’ in Walpole Society Journal, XXXIX, 1964, pp 227-8.
R. J. Lane's lithograph of the drawing, issued privately in 1828, is inscribed: For this drawing His Majesty was graciously pleas'd to sit in the year 1814. Tho. Lawrence. The smaller published edition is inscribed: For this Drawing (made in the year 1814 and designed for a medal) His Majesty was graciously pleas'd to sit. Tho. Lawrence. A later edition, for which the stone was broken, is inscribed: THE KING/For this Drawing His Majesty graciously sat/in the Year 1815/T.L. The medal referred to was presumably never executed, the profiles on the 1814 Peace Medal (by Rundell & Bridge) and on the Waterloo Medal of 1815 being altogether different. Wyon exhibited RA 1817 (981) a 'model in wax from a drawing by Sir T. Lawrence' which may have some connection, Wyon having been appointed Chief Engraver of His Majesty's Seals at the Royal Mint in 1816. The statement in the Woodburn sale catalogue of 1850 where the oil sketch is described as 'painted for the coinage' is presumably based on a misreading of the inscription on Lane's small published lithograph.
Volume I of Lane's MS Account Books lists four drawings for lithographs: (1) '30 March 1827 for self, spoiled in printing'; (2) '25 January 1828 presented to Sir Thos Lawrence'; the proof of this bearing Lawrence's original inscription was given by Lane to Queen Victoria and is in the Royal Library; a copy was exhibited RA 1828 (490); (3) '26 December 1828 for self third drawing spoiled in Printing' [stone broken]; (4) '17 March 1829 for self fourth drawing'.
Kenneth Garlick, ‘Catalogue of Paintings, Drawings and Pastels of Sir Thomas Lawrence’ in Walpole Society Journal, XXXIX, 1964, pp 86 and 88 suggests tentatively that the NPG oil sketch may be the '¾ portrait, the original head from which all the state pictures were painted' in the Lawrence sale Christie's 18 June 1831 (198) bought General Grosvenor and since untraced. Oppé suggests it may be an abandoned design for the 1815 state portrait. But there seems to be no special reason to doubt Lawrence's written testimony (on the Lane lithograph) that it was done for a medal. That the medal was not executed cannot be blamed on Lawrence.
It was probably to this profile that Lawrence referred in his letter to J. W. Croker 15 May 1828: 'I will swear to the exactness of line in His Majesty's portrait at the time I drew it though complexion and the coarse texture of skin in the original may make the copy appear flattering and unfaithful' (MS in Pierpont Morgan Library, New York).