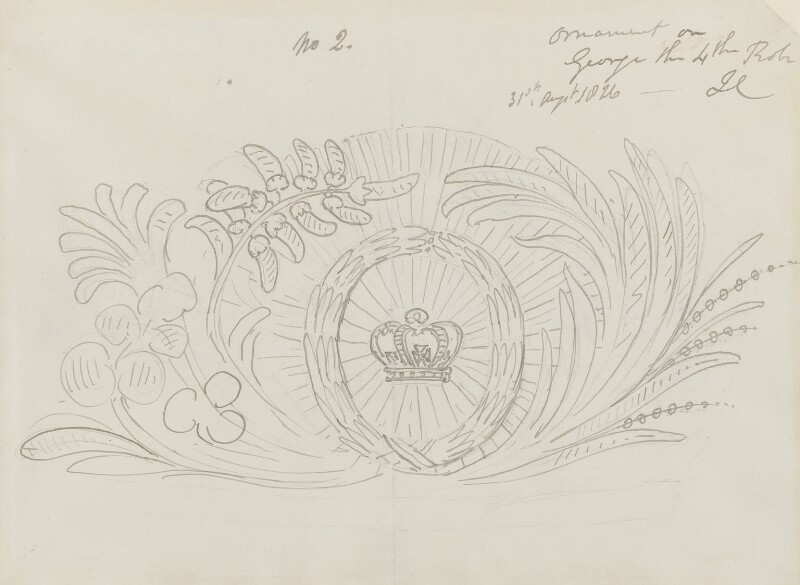 Sir Francis Chantrey’s Ledgers of Accounts (RA) record in October 1821 an 'order from the Duke of Devonshire for a Bust of His Majesty George the Fourth', its execution in 1822 and payment of £210 on 16 February 1826. The bust is at Chatsworth and was exhibited RA 1822 (988); a plaster model is in the Ashmolean Museum (565-53). The Chatsworth bust is the first in the Ledgers of Accounts and was probably the outcome of the drawings. Other busts recorded in the Ledgers are as follows:

A studio version is in the Royal College of Physicians and another was offered to the NPG in 1951. A medal by Bain from Chantrey's bust commemorated the King's visit to Edinburgh in 1822 and was exhibited RA 1828 (494). W. Wyon used the profile for pennies, halfpennies and farthings 1826-30. A miniature by Andrew Robertson in the Royal Collection (Windsor Castle), signed and dated 1831, shows Chantrey in a grey coat and black waistcoat at work on the bust.
The ornamentation drawings (316a 56-7) were for the statue in Garter Robes ordered for Brighton March 1822 for 3000 guineas and executed October 1828, the first instalment paid 14 December 1826 (CL 146); a copy is at Windsor Castle. Other statues by Chantrey are at Windsor (1830), Trafalgar Square (1829, originally for Marble Arch), and Edinburgh (1831). A bronze statuette was lent by Sir Francis Watson to the 'Kings and Queens' exhibition RA 1953 (256).

Stipple engraving by S. W. Reynolds of the bust in profile to right, published 1823 as 'Plate 1st of a series of engravings from the Works of Fs Chantrey Esqre R.A.'; another stipple of the bust in full-face was published in 1825.