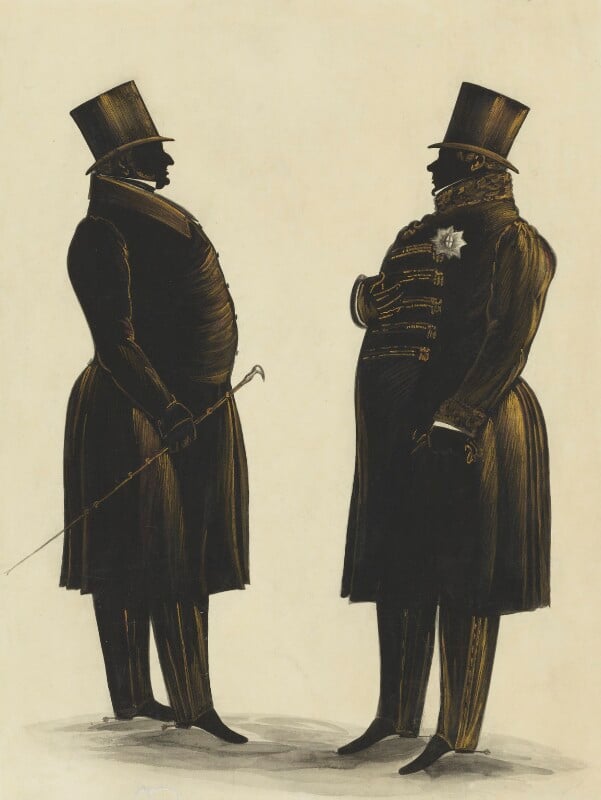 A trade card formerly on verso and now in registered packet in NPG archive reads: Profiles taken and finished in Black, Bronze, Blue-tint,/Cameo and Colours, by/CROWHURST, 40 Old Steine, BRIGHTON./ + + + + /Profiles accurately Copied, and every description of/frames for mounting of Profiles and Miniatures.

Both silhouettes clearly derive from George Atkinson's watercolour drawings engraved in stipple and aquatint by Scriven and published by Atkinson himself in Brighton 1825. In these the King stands in Windsor Park, the Duke in Brighton. Crowhurst who lived in the Brighton house formerly occupied by Atkinson would have had ready access to the Scriven prints and indeed advertised on his trade label, 'profiles accurately copied'. The silhouettes may possibly have been copied, joined together and issued to commemorate the Duke of York's death in 1827. The King was touchy about his profile which as can be seen here was less aristocratic than the Duke's: 'un petit nez retroussé cependant assez aimé' he wrote in his youth to Mary Hamilton.

Whole-length silhouette looking to left holding gloves, in company with his brother the Duke of York holding cane.