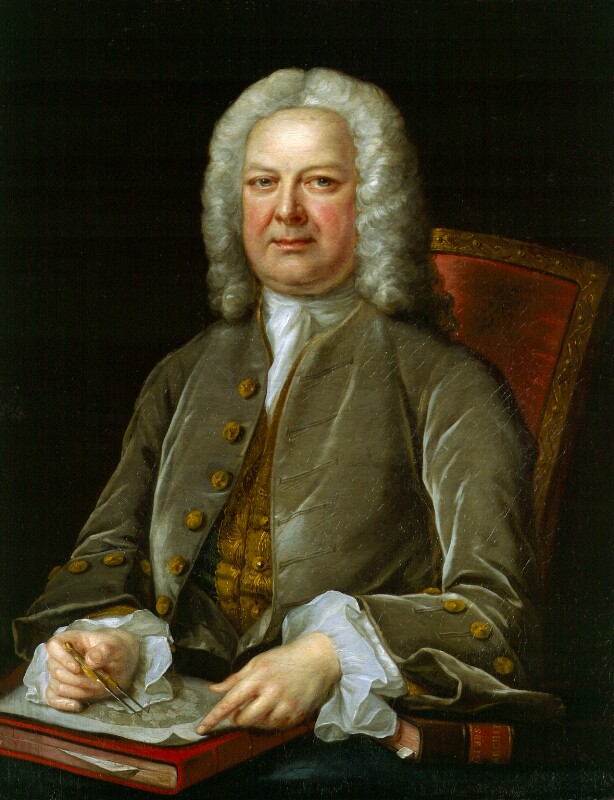 Signed below his right shoulder in black: J. Williams Pinx., the J rather faint.
On the top bar of the stretcher a stencil 24 H, and in ink on a paper on the back of the centre bar: Portrait of Gibbs, the Architect, from Mr. Sharpe's Collection/I bought from his Seat at Brockley Hill, Middx, on/the demolition of the House in [paper torn] 1830./Thomas Sharpe Smith/21 Nov. 18(44)- the last two figures indistinct.

The Bodleian possesses an almost identical picture signed and dated 1752. [1] The relationship between this and NPG 504 has yet to be clarified. The book lettered ARCHIT in our picture could be either Gibbs' A Book of Architecture, published 1728, or his Rules for Drawing the Several Parts of Architecture ...,1732, and the unlettered volume his drawings for the Radcliffe, published as Bibliotheca Radcliviana, 1747. The type seems to associate Gibbs with the Radcliffe building (1737-49) but it is not known whether it was painted in the early stages of the work or after its completion. The Bodleian version may have been painted as a thank-offering to the university, from whom Gibbs received an honorary MA in 1749.

Pale blue eyes, broad face, fresh complexion, grey wig to shoulders; greyish-white neck-tie and wrist ruffles, grey velvet coat open to waist, gold-brocaded waistcoat; in his right hand he holds dividers and with his left he points to a plan [of the Radcliffe Library] spread on a book, his elbow resting on another book bound in brown calf and lettered GIBBS/ARCHIT; brown background.

A discolouration in the back of the chair probably conceals an old damage; some retouching round the edges; the relining canvas is now frail and the varnish somewhat discoloured.

Bought 1878, Christie's 26 July, 2nd day, lot 274 (an extra lot); purchased as recorded on the stretcher, by Thomas Sharpe Smith, 1830. In 1872 [1] Scharf noted it at a Captain F. Harrison Smith's, Cavendish Road, London, by whom it was offered with other portraits including those of the Duke and Duchess of Richmond and Lord Grandison, all 'formerly in Mr Sharpe's collection at Brockley Hill House, Edgware'. [2] NPG 504 is therefore presumably the 'head of Gibbs the architect' seen there, with other portraits, by Lysons [3] who referred to Mr Sharpe, an attorney, [4] as having been secretary to the Duke of Chandos; it was the Duke's seat at Cannons that Gibbs had rebuilt 'at vast Expence'. [5] Though not mentioned in the inventories, the portrait may thus once have belonged to the Duke himself. No information is available regarding the relationship, if any, between Mr Sharpe, Thomas Sharpe Smith and Captain Harrison Smith.

Engraved by J. McArdell, undated, with the following additions, as in the Bodleian version: the plan lettered A plan of the Radcliffe library, a square between the books, and an elevation of the library tucked in beneath the volume under his left arm.