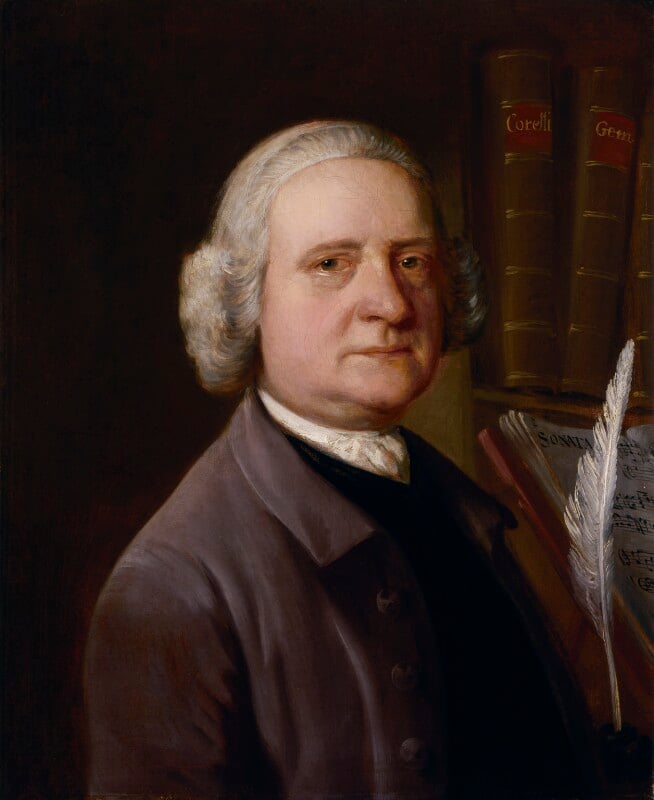 A manuscript label at the bottom of the stretcher, in an early hand and partly illegible, after touching with ammonium sulphate in 1928, was read by Hake: This portrait of Mr. Gibbs I by Gainsborough [belongs] to FANNY BULLEN.

The portrait is of Gainsborough's Ipswich period, probably the mid 'fifties, and is very close to that of 'an unknown man', collection Mrs Isherwood Kay, [1] sometimes suggested as a member of the Gibbs family. The music has not been identified. It is not one of Corelli's violin sonatas nor one of the Eight Solos, Gibbs' only known published work, which appeared in 1748.

A blister between the two books was laid in 1931.

Bought, 1928, through Leggatt's; at Christie's, 20 June 1919, lot 65, anonymous property [George Bullen], bought (in?) Wheeler, and again at Christie's, 27 January 1928, lot 117, by order of Bullen's executors, bought in. [1] Exact descent has yet to be established but from correspondence with R. H. Lingwood (pseudonym 'Rambler') of the East Anglian Daily Times, apparently confirmed by the manuscript label read in 1928, it would seem to come through John Bullen of Lowther, Westmorland, rector of Newbourn, Suffolk, and of Kennet, Cambs., who married 21 October 1757, Anne, the sitter's elder daughter and executrix. In 1936 C. Allix, agent to the Duke of Devonshire, told Steegman that the picture had belonged to his family and hung in his home at Swaffham until sold, about 1922, at Foster's in Pall Mall for £25, the vendors having no knowledge of its previous history, thus implying another version; none appears to be recorded.

'Church Treasures of the Archdeaconry of Ipswich', Ipswich, 1965.