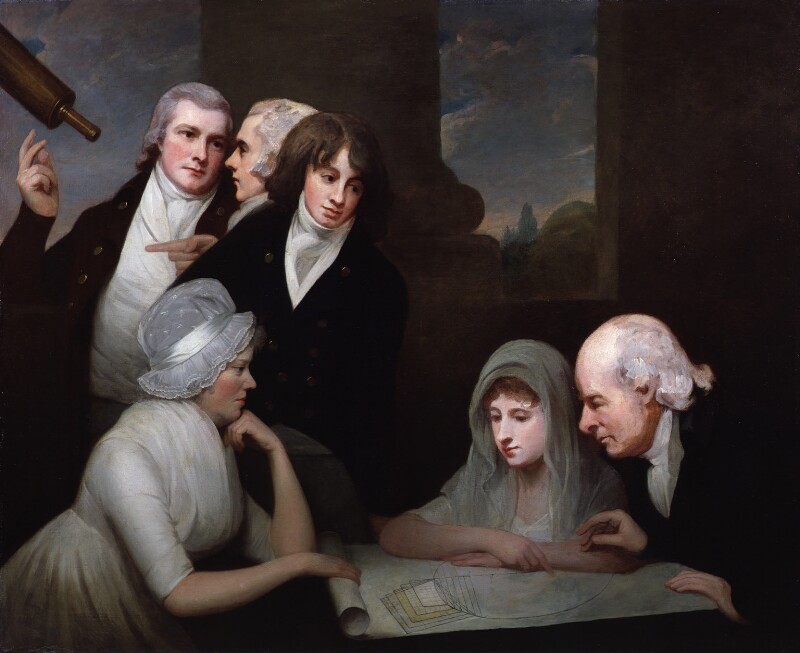 The figures were identified by the donor, [1] as follows:
Adam Walker is seated in the foreground, extreme right: an elderly bald man wearing a blue-grey coat, poring over a diagram. [2]
In the background from the left, his three sons:
William Walker (1706?-1816) who continued his father’s lectures; dark brown eyes, grey powdered wig, deep brown coat, pointing to the end of a telescope.
Adam John Walker (1769/70-1839), rector of Bedston, Salop.; with white powdered hair.
Deane Franklin Walker (1778-1865) who succeeded his brother William as a lecturer; brown eyes, dark hair, deep blue coat, grey breeches.
In the foreground from the left, his wife and daughter:
Mrs Eleanor Walker (married c.1764, d. c.1801); blue eyes, grey haired, wearing white.
Eliza Walker (d. 1856) married Benjamin Gibson of Gosport; brown hair, wearing white.
The uneven execution and the curiously ill-balanced composition of NPG 1106 are explained by its early history. Romney was already beginning to suffer from that 'lassitude of body, and restlessness of mind’ which clouded his last years when he began the picture. Hayley recounted how 'Towards the end of 1796, though still dejected, he began a picture of the respectable lecturer in philosophy, Mr Walker and his family, a gentleman endeared to the painter by an intimacy of many years’; on 25 December 1796 Hayley’s son told him that 'Romney was preparing to finish the group in what he called his favourite picture of friendship’. [3] On 30 December Farington noted in his diary that Romney had tolk Sawrey Gilpin 'He will paint no more portraits, the last he has begun, - portraits of Walker the Experimental Phiosopher & some of His family’. Apparently he never completed it, for on 27 January 1802 Walker wrote to thank him for his 'last most agreeable present, my family picture. I have got the draperies painted, and a handsome frame, so it is the great lion of my parlour’. [4] On 4 May 1804 William Blake told Hayley he had seen ’the last performance of Romney. It is of Mr Walker and family, the draperies put in by somebody else. It is a very excellent picture, but unfinished. The figures as large as life, half length, Mr. W., three sons, and I believe two daughters, with maps, instruments &c.’ [5] Walker was a lifelong friend of Romney; [6] with his wife he had appeared in one of Romney’s earliest paintings, the Boating Party on Lake Windermere of c.1758, and he modelled drapery for Romney’s King Lear in the Tempest c.1761. [7] After Romney’s death he told Hayley of their long association, affectionately recalling the painter’s pride and impatience, and listing, among the Romney paintings he owned ’my own portrait at full length ... My own head taken fifteen years ago; and my whole family in one piece, one of his last performances. These I hold invaluable.’ [8].

By descent1 to the sitter’s granddaughter, Miss Ellen Elizabeth Gibson, Durham, by whom bequeathed 1897.

1 The Romney Ledger has an entry under no.81: 'Mr Walker, George Street, Hanover Square, half-whole-length; gift, unfinished’ (H. Ward & W. Roberts, Romney, A Biographical and Critical Essay with a Catalogue Rainsonné of his Works, 1904, II, p 163).