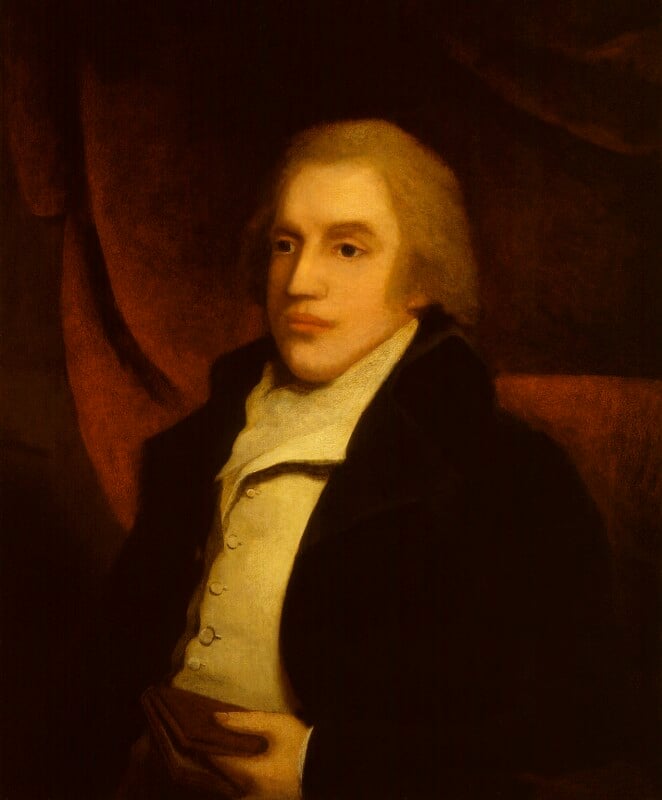 W. McKay & W. Roberts list two Hoppner portraits of Gifford:
(1) that in John Murray's collection (of which NPG 1017 is a replica by Hoppner himself); this was engraved as above and exhibited Manchester 1857 and Third Exhibition of National Portraits, South Kensington, 1868; it is in poor condition and has also been attributed to Beechey; a copy was at Sotheby's 24 June 1931 (115).
(2) an earlier type in Gifford's own collection and after his death acquired by his friend and executor, John Ireland, Dean of Westminster. This was inherited by the Dean's niece, Miss Searles, acquired by Henry Tozer of Ashburton at Christie's 13 May 1899 (74), bought Agnew, offered to the NPG 16 May, declined and still with Agnew in 1903. Nichols refers to them both as 'the portrait of him in his Juvenal [John Murray's] taken from a picture by his friend Hoppner, is a very good likeness; but there is a still better [Dean Ireland's] painted by the same artist which after his death came into the possession of his executor, the Dean of Westminster' (John Nichols, Illustrations of the Literary History of the Eighteenth Century, 1831, VI, p 36).
In spite of frequent quarrels Hoppner and Gifford were friends. McKay & Roberts quote Gifford's lines To Hoppner on their title-page: 'Through the disparting gloom thou strik'st the sight;/While baffled malice hastes thy powers to own,/And wonders at the worth, so long unknown!'. Gifford dedicated The Maeviad to Hoppner and left his house in St James's Street to Hoppner's widow together with legacies to her children.

Given by Francis Turner Palgrave 1895.

Line by Cromek used as frontispiece to Gifford's translation of Juvenal, 1802 and stipple by Ridley in The Monthly Mirror, 10 September 1802; several later prints.