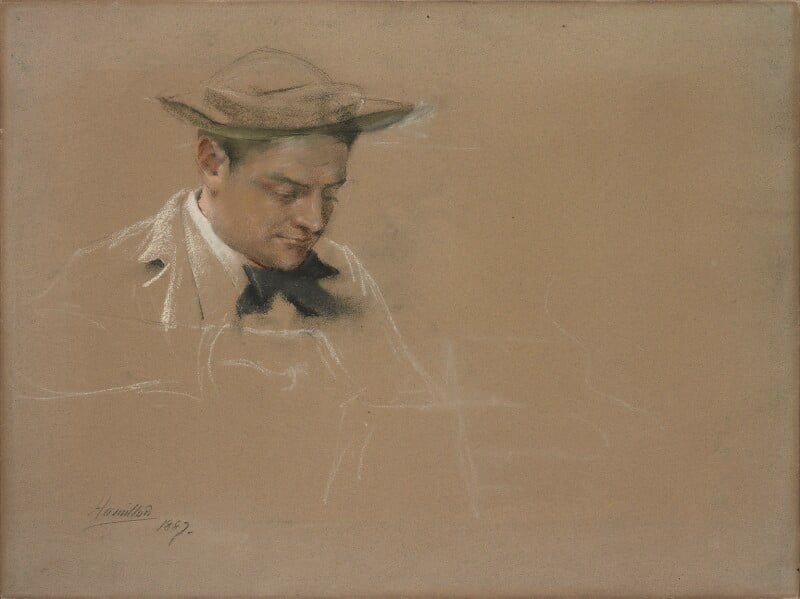 In 1920 the American John McLure Hamilton – who had been born in Philadelphia but lived in England from 1878 – offered four of his works to the National Portrait Gallery: the present pastel of Gilbert and further portraits of sculptor (Edward) Onslow Ford (NPG 1866), landscape painter Matthew Ridley Corbet (NPG 1867), and poet and critic William Cosmo Monkhouse (NPG 1868). ‘These four men, contemporaries, were intimately associated with each other in friendship and work throughout their careers,’ he wrote to the Gallery’s director, J.D. Milner. ‘All were at one time my intimate friends: the only one still living, Gilbert, is an exile.’ [1] Gilbert had been living in Bruges since 1903 and would not return to England until 1926. In a sense the arrieriste Hamilton and (to a lesser extent) Gilbert were both involved in a comparable struggle for recognition in a changed, post-war society.

Soon after this gift Hamilton published his memoirs, Men I Have Painted (1921). Here he relates that at the time of the drawing Gilbert was working on the Shaftesbury Memorial fountain for Piccadilly Circus; describing him as ‘a stoutly built, powerful man with a strong, square head and masterful jaw’, he rated Gilbert as ‘the modern Cellini and the greatest of all English sculptors’. [2]

A portrait of Gilbert by Hamilton was shown at the annual exhibition of the Royal Society of Portrait Painters in 1912 (135, possibly NPG 1865; no further details).

Hamilton drew the sculptor in his working clothes, as confirmed by photographs of the late 1880s/early 1890s. Another report of a studio visit describes Gilbert as ‘a sturdy man, of medium stature, with clean shaven, determined features, almost boyish in their frankness’, dressed in ‘a white flannel coat and vest, low collar, and necktie à la Française’; he stood out among his smock-clad assistants by ‘the hat on his head, and sneezing more or less all the year round’.[3]