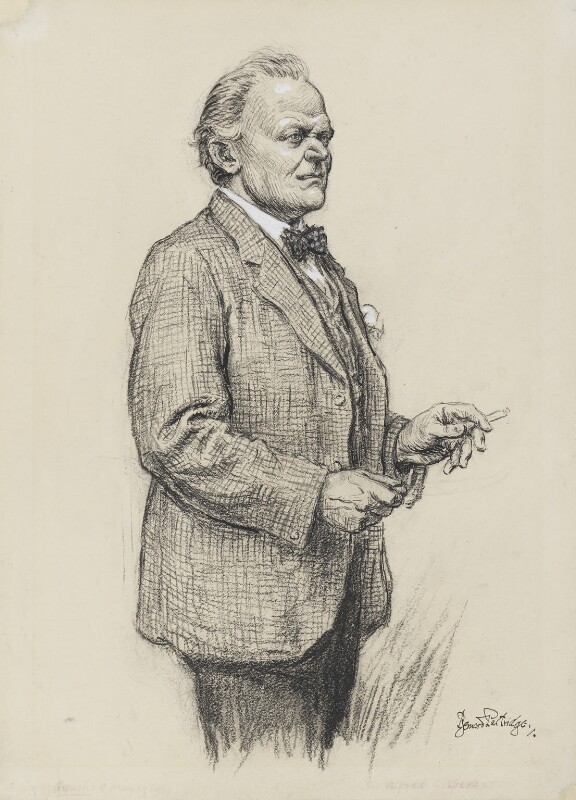 Gilbert returned to settle in England in August 1926, after twenty-three years of travel and unhappy exile on the Continent. His friend and patron Queen Alexandra had died in 1925 and, controversially – Gilbert was now in his seventies and had a poor record for delivering work – he had been awarded the commission to design a monument to her memory (1926–32, Marlborough Gate, London). At the same time he set about finishing the remaining figures for the tomb of the Duke of Clarence (1892–1928, Albert Memorial Chapel, Windsor) and undertook new work including goldsmith designs.

In 1929 Isabel McAllister’s biography of Gilbert was published.[1] The artist was now sufficiently back in the news to feature as the Punch ‘Personality of the Week’ on 8 May 1929, in this full-page drawing by (John) Bernard Partridge. The tag below the published drawing (‘This is the man that made the wingéd Love [...] Come, Eros, come back soon to Piccadilly / and make the art of ugliness look silly!’) referred to the removal of the figure of Eros from the Shaftesbury Memorial while the Underground station was being built.[2] In the same year a replica of the memorial was erected in Liverpool.

Partridge worked for Punch from 1891 until his death; he was appointed principal cartoonist in 1910. In this portrait chargé he gives Gilbert a pugnacious expression, in contrast to other portraits of him at the time.

Given by Mr D. Pepys Whiteley, 1958, and accepted for the Reference Collection.