1 of 7 portraits of James Gillray 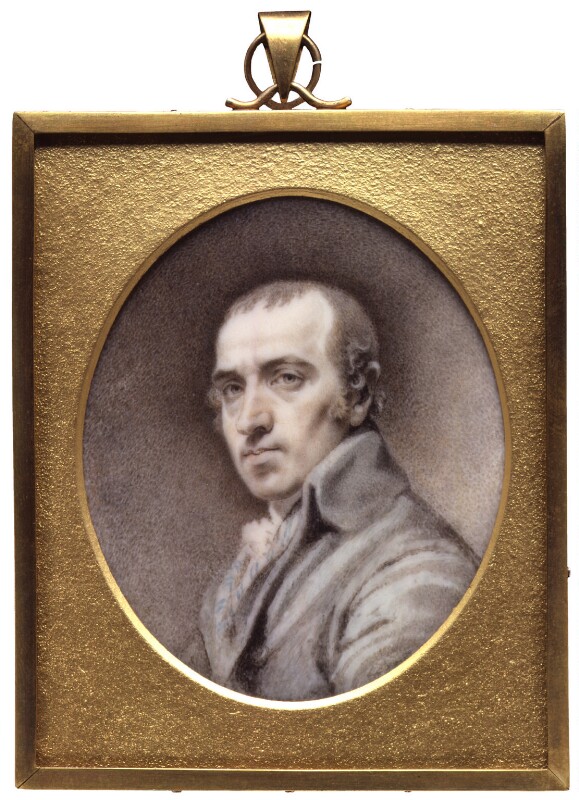 The miniature shows the artist aged about 40 to 50 and therefore can be dated c.1800 when he was at the height of his powers and turning out formidable anti-Napoleon satires, Fox being a special victim. One account states that he gave it to his friend and publisher Hannah Humphrey who bequeathed it in 1818 to the Rev Charles Sneyd who wrote to his cousin Charles Bagot, '.... she left me all Gillray's sketchbooks and drawings, and his picture in miniature by himself.' (Josceline Bagot, George Canning and his Friends, 1909, I, p 55). An alternative account is given by Bagot himself in a letter to the NPG Chairman, Lord Stanhope: 'I can guarantee its authenticity as Gillray himself painted it and gave it in 1809 or 1810 to a relation of mine to whom he was under an obligation, and until he gave it to me in 1835, it had never been out of his possession nor (oddly enough) out of the room in which it was painted.'
Charles Turner's mezzotint is over three times the size of the miniature, possibly the origin of a theory that the miniature is not the original and a larger picture exists (Daphne Foskett, Dictionary of British Miniature Painters, 1972, p 290); but this is refuted by Turner's own lettering, 'From a Miniature painted by himself'. Gillray is certainly not well-known as a miniature painter though a firescreen exists surrounded by a circle of miniature caricature heads possibly of Hannah Humphrey's social group (F. D. Klingender in Connoisseur, CXIV, 1944, p 28).
The miniature was used in reverse by Gillray's admirer George Cruikshank in 'A Cure for Drowsiness', 25 January 1822 (BM 142).

Mezzotint by Charles Turner 'from a Miniature painted by himself', published 19 April 1819 by George Humphrey (Alfred Whitman, Charles Turner, 1907, 224); an interesting early state of this mezzotint is in NPG library Works of James Gillray (Bohn edition, n.d.) frontispiece; a later state is NPG 3650, vol.1, coloured etching (in reverse) with caricatures in background; a drawing of this etching in the British Museum is catalogued as either a repetition or a copy by Gillray from the miniature in the NPG (Laurence Binyon, Catalogue of Drawings by British Artists … in the British Museum, p 218). Stipple by Brown 1848.