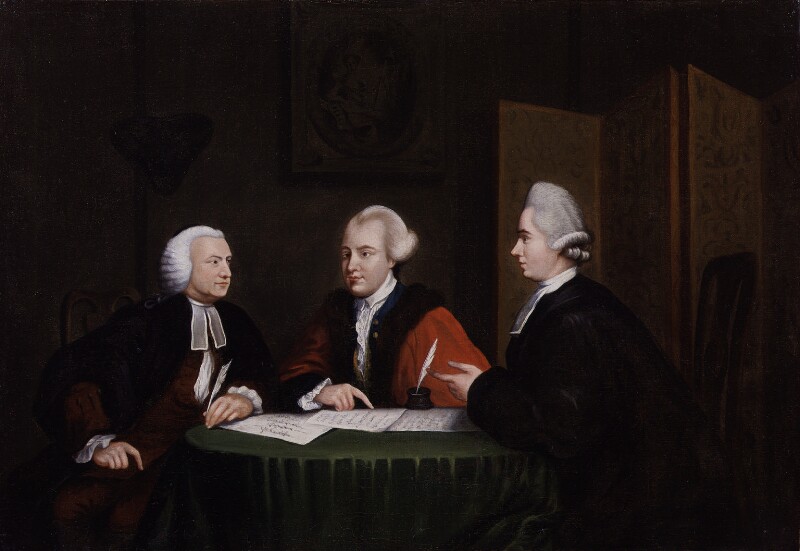 NPG 1944 shows from the left:
John Glynn (1722-79), sergeant at law, brown eyes, white powdered wig, with little black top-knot, wearing a black gown over a brown suit, a quill in his left hand; his tricorne hat hangs on the wall behind him.
John Wilkes (1725-97), brown eyes with a pronounced squint, white powdered hair, wearing an alderman’s red gown trimmed with black fur over a blue coat with gold buttons and a gold vest; on the wall behind him hangs a painting of the figure of Liberty, holding the cap of liberty on a pole in her left hand.
The Rev John Horne Tooke (1736-1812), brown eyes, white powdered wig, wearing a clergyman’s black gown and bands.
NPG 1944 is copied from the Houston print of the three radicals, an imaginary composition published on 6 February 1769. [1] Horne (who in 1782 became Horne Tooke) and Glynn were then Wilkes’s most influential supporters (though neither, ultimately, was a friend); the former led the Society of the Supporters of the Bill of Rights which first met in February 1769, resolved to restore Wilkes’s solvency and liberty.
When the print was published Wilkes, elected MP for Middlesex in April 1768 and an alderman of the City of London on 2 January 1769, was in the King’s Bench prison, charged with sedition and obscenity. Glynn, as a ‘Wilks and liberty’ candidate, had just defeated Sir William Beauchamp Proctor in another Middlesex election in December 1768 (necessitated by the death of Wilkes’s fellow MP, George Cooke), and Horne had raised his election expenses. The engraving identifies the papers on the table (illegible in NPG 1944): Glynn rests his hand on Addresses to/County of Middlesex/Constitutional Law/Legal Liberty; Wilkes points to General/Warrants/Seizure of/ Papers/Habeas/Corpus/Alteration/of Records/Informations/ex Officio/Close/Imprison/ment, and Horne has before him Treatise on/Inclosing/Commons/Freedom of/Elections/Trial by Jury/Letters to Sr. J. Gibbons/and Sir/W. B. Proctor; [2] the figure of Liberty in the picture on the wall sits by an unfurled Magna/Charta. They collectively refer to Wilkes’s struggle with the law and his arrests in 1763 and 1768, Horne’s legal acumen, and Glynn’s electoral triumph.
Two of the heads derive from contemporary engravings: Wilkes from one of the many after R. E. Pine which first appeared in 1764, and Glynn from an anonymous bust-length oval published in Smollett’s History of England, 1763-65. Horne’s profile head recurs in an anonymous half-length mezzotint of c.1769 and in two caricatures, The Macaroni Parson of c.1769 and Guy Faux setting fire to the Pillars of the London Tavern of 1773.
NPG 1944 wholly depends on the mezzotint (it is exactly twice the size), and differs only in pedantic detail, e.g of drapery folds and the patterning of the folding screen. Houston’s engraving is inscribed Richard Houston invt delin et fecit, [3] but although NPG 1944 has hitherto been attributed to him, it is most unlikely that Houston, otherwise unrecorded as a painter, should either have made such an elaborate preparatory design for a topical derivative plate, or subsequently copied it in oil. On the other hand there must have been a strong market among radicals for copies painted from the print; early in the 19th century the image was being used as a pub sign (‘The Three Johns’) near Queen’s Square, Westminster. [4]

1 Letters from G. Evans, 3 Raymond Buildings, Gray’s Inn, to Scharf, dated October 2, 28: ‘it was purchased some time back, [by] my late father of Mr Garratt, a picture dealer in the Strand’.
2 As described in a label, signed E. W. Radclyffe, 16 January 1868, formerly attached to the verso of NPG 1944: ‘for many years in the possession of Mr Evans’s family, of three Staples Inn, Holborn-bars, London, and was bought from that gentleman for Miss Burdett-Coutts’.