2 of 12 portraits of Frederick Goodall 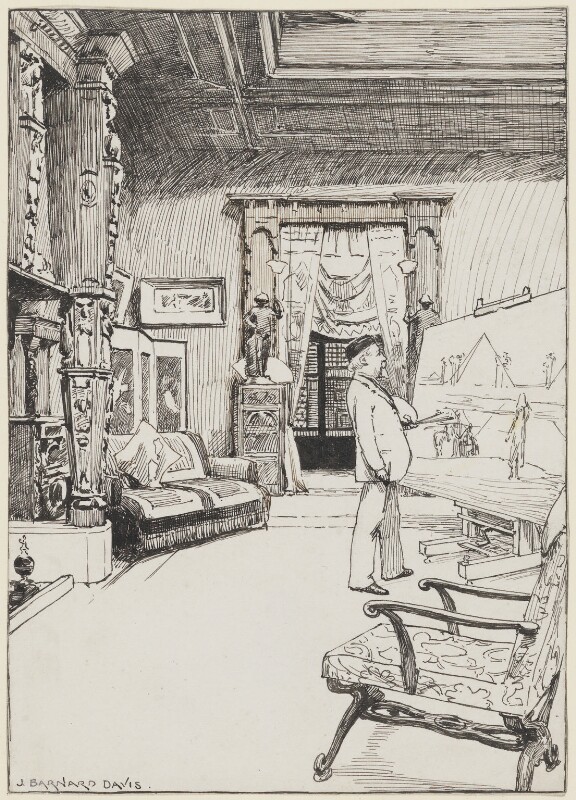 Joseph Barnard Davis worked as an illustrator in London between 1890 and 1911.[1] He was also a painter of landscapes, genre and portraits and exhibited at the Royal Academy at dates between 1893 and 1934. There is no evidence that this drawing of Goodall was actually published.

In 1883 Goodall moved to 62 Avenue Road, Regent’s Park, a villa which had belonged to the dealer Ernest Gambart in the 1860s. Gambart had built on ‘a very large room’ which was used as a picture gallery, and for concerts and balls, and Goodall himself used it as a showroom adjoining the studio, a grand space in which to display his ‘pictures when finished and a few sketches of subjects for pictures’. Davis’s drawing records the opulent setting, also described by Goodall in his Reminiscences:

The grand oak mantelpiece of large size is of Flemish carving of the time of James I. Two bronze figures bought at the first great Paris Exhibition stand on carved oak pedestals, on the other side of the doorway leading to the balcony overlooking the studio, which is seen through an Egyptian Musharabea lattice-work at the head of the stairs.[2]

The artist is posed in front of The Water of the Nile (Manchester AG, 1893.22) which was painted and exhibited at the Royal Academy in 1893, and this suggests a similar date for the drawing.[3]

Whole-length, to right, standing in profile, wearing a black cap and holding palette and brushes, facing large canvas on easel at right.