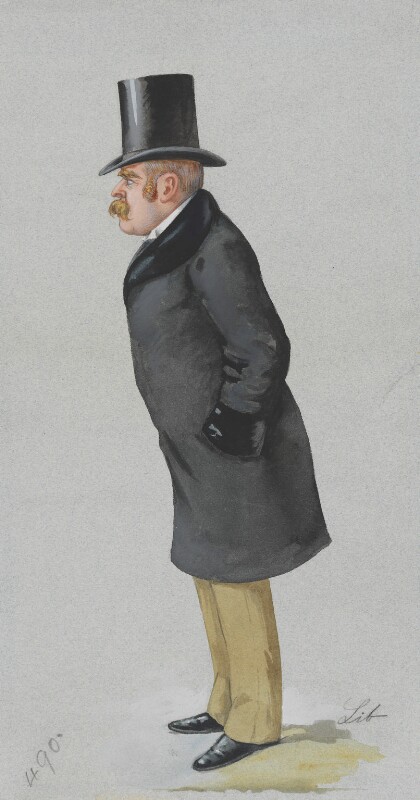 This caricature was drawn for Vanity Fair and published there on 22 February 1890, where its details and colouring were accurately reproduced. The accompanying text by editor Thomas Gibson Bowles, writing as ‘Jehu Junior’, may be based on information supplied by the sitter. It reads:

Born, at Barnstaple, some four-and-forty years ago, his father – who was an architect – sent him to school, where he scribbled in, rather than read. his lesson books with so much assiduity that by the time he got into Caesar he began to earn precarious pocket money by selling illustrated editions of that author, and of others, to such schoolfellows who were able to perceive merit in his work passing the attractions of the tuck shop. Thus encouraged, he practised his immature pencil upon the town gaoler with such success that he drove the old gentleman to the Mayor for protection; after which episode he came to London and settled in the City, with a view to drawing animals of the bull and bear kind [i.e. stockbrokers]. And in the City he is to this day better known by his pencil than he is by his finances.

He has weakness of cigarettes, ornithology and politics – the last being especially bad, as he is an unblushing Home Ruler. He is a Captain in the London Irish Rifles; he has ventured to caricature one or two prominent members of the Stock Exchange, and he has even dared to write a book. He believes that he is an artist, and such papers as the Pall Mall Gazette and Truth have for years done what they could to foster this belief in him.[1]

By 1890, Gould had in fact written or illustrated a number of books, although not those of political satire on which his reputation would be founded. Indeed, compared with other ‘Men of the Day’ featured in Vanity Fair, he was not yet a prominent figure in public life, and better known on the Stock Exchange than in the Palace of Westminster. He is depicted looking older than his years and dressed not as an artist but as the stockbroker he also was – a City gentleman in stovepipe hat and fur-collared coat. Only his ginger hair, bushy eyebrows and moustache hint at a second self. Shortly after this date Gould grew an artist’s beard, seen in the similar drawing by ‘ELP’ (see ‘All known portraits, c.1890s’). As a caricaturist, he himself was an occasional contributor to Vanity Fair,[2] but since he worked largely for Liberal-supporting papers, the present work represents a portrait of a fellow-cartoonist on rival publications.

The artist, Liborio Prosperi, was born and died in Foligno, Italy.[3] After studying under Cesare Maccari in Rome he had some success with personal caricature sketches and in 1884 moved to London where his first exhibition took place in Mincing Lane, comprising 100 sketches over the sobriquet ‘Lib’ of men in the City’s financial institutions.[4] This was well reviewed by several small magazines, and probably brought Prosperi into contact with Gould. From 1886 to 1894 he joined his compatriot Carlo Pellegrini (‘Ape’) and Leslie Ward (‘Spy’) on Vanity Fair, adopting the portrait format established by these artists. In 1890 Vanity Fair published nine caricatures by Prosperi and thirty-five by Ward (Pellegrini had died the previous year).

Six of Prosperi’s caricature portraits are in the National Portrait Gallery Collection, together with his group portrait of political men in the Lobby of the House of Commons (1886; NPG 5256). He established studios in London and Liverpool and became a friend of the Duke of Hamilton; in 1892 he made a world tour. In 1895, after Hamilton’s death, he returned to Italy where he married and resettled in his native city.[5]