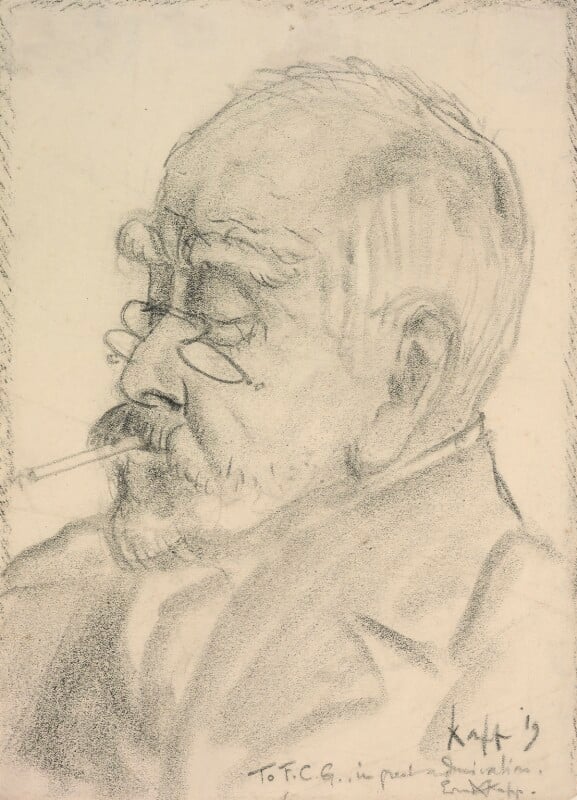 At the date of this drawing, the sitter was aged 74 and celebrated as a leading political graphic artist of the pre-war period – the first modern English cartoonist to be knighted and one of the highest paid.[1] The artist was a young practitioner in the same field, and the inscription testifies to his recognition of Gould’s eminence.

They met following Kapp’s solo show at the Little Art Rooms, Adelphi, in 1919. Many years later, when the drawing was exhibited with other Recent Acquisitions by the National Portrait Gallery, Kapp wrote to say he was ‘much mystified’ as he could not remember ‘having met “F C G”, let alone drawn him!’ After receiving a photograph, he confirmed the attribution, adding:

I had my first one-man show when I came out of the Army in 1919 and I recall that ‘F.C.G’ wrote something extremely nice about my work and also wrote to me personally. I remember a charming correspondence with him; but the strange thing is that, even now, with my portrait before me, I do NOT recall meeting or drawing him! As I have never made a drawing of anyone except from life, he certainly must have sat for me – but the event has left a blind spot in my memory![2]

The inference from this is that following the ‘charming correspondence’, Kapp met Gould, took the opportunity to sketch him and presented the work to the sitter, in gratitude for his commendation of Kapp’s exhibition. It was offered to the Gallery in 1946 together with an oil portrait of Gould by his son (see ‘All known portraits, 1900’), which was declined.[3]

It is loosely executed, with an early version of Kapp’s nervous or ‘dancing’ line,[4] focusing on Gould’s eyebrows, pince-nez glasses and perpetual cigarette – note his fondness for smoking cited in respect of NPG 3278.

Edmond Xavier Kapp went on to become a leading British draughtsman. Twenty-three of his works are in the NPG collection, including ten portraits of delegates to the League of Nations in the 1930s; others are in the British Museum and the Imperial War Museum, London. A total of 243 portraits and caricatures are in the Barber Institute, University of Birmingham.

Head-and-shoulders, profile to left, wearing pince-nez, with cigarette in mouth.

The sitter; probably his eldest son Alexander (Alec); his brother, Norman Carruthers Gould, from whom purchased for £2.0.0 in 1946.