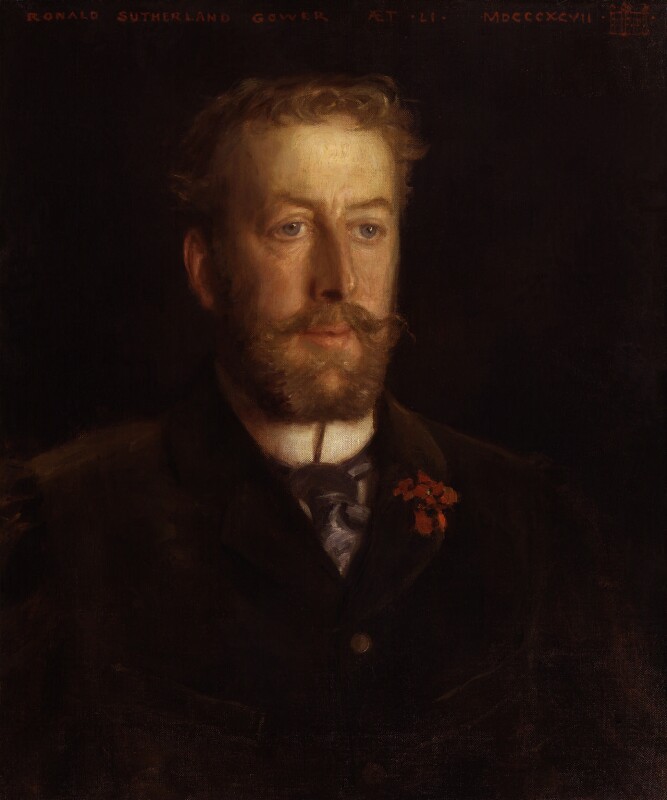 According to the artist’s register of paintings, [1] where the work is listed as R256, this was executed in April–May 1897 at 27 Trebovir Road, West London, which was the sitter’s residence between 1893 and 1899.

At this date, Gower was aged 51 and well-ensconced in his role as dilettante, commentator and Trustee of the National Portrait Gallery in its new, purpose-built premises. His acquaintance with Henry Scott Tuke probably began in 1894, after he received a letter from the artist’s father, the editor of the Journal of Mental Science, commending Gower’s book on Joan of Arc. Tuke’s August Blue was then a star picture at the Royal Academy summer show, attended by Gower on 4 May, and on 15 May he was escorted to Gower’s home by Frank Hird, of whom Gower commissioned a pastel portrait. [2] Gower and Hird (who became Gower’s adopted son in 1898) were life partners, and it is possible that the present work represents a companion piece to the portrait of Hird, despite differences in size and medium. On Easter Saturday 1897 Gower returned to London after some months in Italy with Hird and (Charles) Hamilton Aidé, and sittings to Tuke must have taken place in between Gower’s many visits to friends in England. [3] It was recorded as ‘nearly finished’ after a sitting on 18 May. [4] On 19 May Gower left for Paris, to see the Salon.

Unlike Millais’s portrait of Gower of two decades earlier (see ‘All known portraits, By other artists, 1876’), which offers the profile image typically chosen for Gower, this depicts him nearly full-face in traditional patrician style, wearing a dark suit and stiff collar. Only Gower’s cropped curly hair and whiskers, together with his customary buttonhole, suggest any deviation from the standard gentlemanly figure. This has recently been interpreted as a covert allusion to Gower’s sexual orientation: it is ‘an interesting painting of a man who had both a very public life and a “public” private life. Tuke depicted him as a fin-de-siècle aesthete, his pale blue silk tie around a wingless collar and a red flower in his lapel. His vanity was also reflected in his beautifully coiffured moustache and beard in the true fashion of a Victorian dandy.’ [5]

The inscription running along the top edge gives his name and age, the date and a sketch symbol of a castle keep with four turreted corner towers, which bears some resemblance to Dunrobin Castle, ancestral home of the Dukes of Sutherland. [6] The artist’s signature, originally in the same red paint as the inscription, was later overpainted (but not obliterated) in black.

Henry Scott Tuke trained under Edward John Poynter and Alphonse Legros at the Slade School from 1875, and then in Florence and Paris. He worked in Cornwall during the 1880s, specializing in images of fishermen and young male nudes, and developing an impressionist technique. He exhibited at the RA 1879–1929, whence All Hands to the Pumps (1889) and August Blue (1894) were purchased for the Tate Gallery Chantrey Bequest. Elected ARA 1900 and RA 1914, he was also a member of the Royal Society of Painters in Water Colours and the New English Art Club. Alongside his subject pictures, he pursued a profitable career in portraiture, which was advanced through his acquaintance with Gower.

The work’s provenance is currently incomplete. It was purchased from Ronald George Scotcher (1914–93) of Eastbourne, who informed the NPG that his father had done ‘a great deal of work for Lord Gower [sic] immediately preceding the first War’ and had also owned an early watercolour by Tuke depicting ‘two old gunboats in Falmouth’. [7]

1) Copy in Tate Archive. Citing Tuke’s diary, Sainsbury (1933, p.121) states that the portrait was painted at 1 Eldon Road, in a studio lent to Tuke by Miss Donald Smith, which may indicate that it was begun in one location and completed in the other. Although Gower had been a sculptor, Tuke would have required the facilities of a painter’s studio. Information from Catherine Wallace, 2008.
2) According to Tuke’s diary, Hird took Tuke to meet Gower on 15 May 1894 and Tuke dined with Gower on 25 and 29 May (quoted Sainsbury 1933, p.112). Tuke’s portrait of Hird is reproduced on Wikimedia but no image source or location is given. According to Wallace (2008, p.73), Hird met Tuke through Charles Kains Jackson, a member of the ‘clandestine group known as the Uranian [homosexual] poets’, who also included Gower’s friends {John Addington Symonds} and Horatio Brown. Despite the homoerotic aspects of Tuke’s paintings of nude youths, he was not an active ‘Uranian’, and any such relationship between him and Gower remains unproven. According to Cooke (1968, p.194), Gower’s ‘activities were common knowledge’ but ‘he avoided any public scandal’.
3) See Gower 1902, pp.292–301; no reference to Tuke is given in Gower’s published diaries.
4) Tuke’s diary, quoted Sainsbury 1933, p.122.
5) Wallace 2008, p.73, which consistently gives Gower’s first name as Roland. Perhaps, too, it overlooks Gower’s high aristocratic bearing and membership of Court circles, where fastidious dress was obligatory. He is not remembered as especially vain.
[6] The reference remains conjectural, however.
[7] Letters from R.G. Scotcher to Richard Ormond, 16 and 22 Mar. 1971, NPG RP 4841.

Presumably the sitter; the father of R.G. Scotcher of Eastbourne, from whom purchased 1971 for £100.