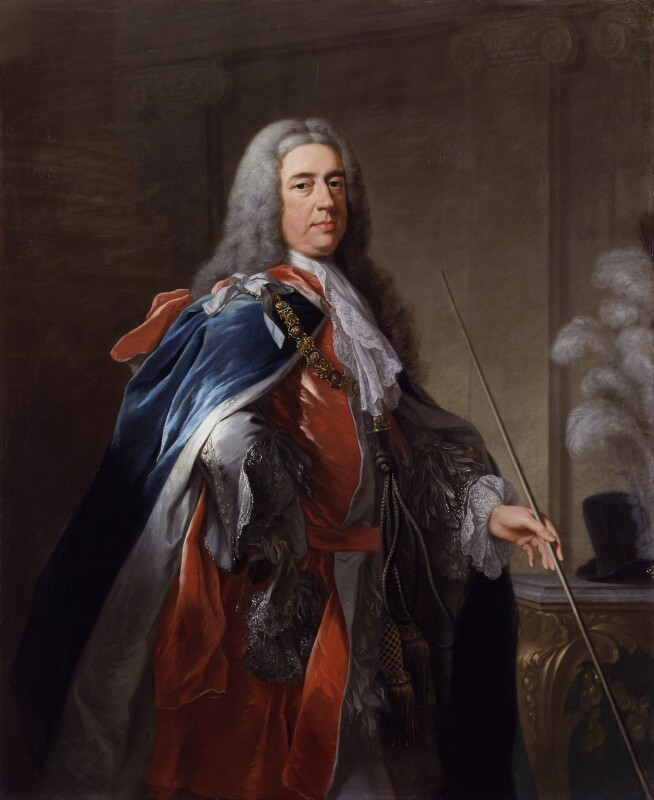 Attribution to Hoare dates from the time of acquisition but there is no contemporary record of a portrait by this artist. A three-quarter length of the sitter in the Harrington heirlooms sale, [1] Christie's, 18 May 1917, lot 24, listed as the 3rd Duke and partly sketched by Milner, was attributed to Hoare as was a portrait of similar size which appeared at Christie's, 10 March 1950, lot 117 and again 17 October 1952, lot 111. The latter, a version of the portrait of 1739 by Vanloo at Euston Hall, has a coronet on the table instead of the plumed hat. No composition corresponding to NPG 723 is among the Hoare drawings in the British Museum and although the portrait is probably an independent type, it might conceivably be based in part on the Vanloo design. The features have been smoothed out and the manner, with the pronounced thrust of the elbow, is somewhat reminiscent of later Hudson.

Presented, 1884, by Sir Richard Wallace, Bart, as by Hoare; possibly inherited 1870 from the collection of his father, 4th Marquess of Hertford. [1] The 1st Marquess married, 1741, Isabella, the sitter's daughter. There is no reference to the portrait in Musgrave's brief list of Hertford pictures at Ragley, 1797. [2]