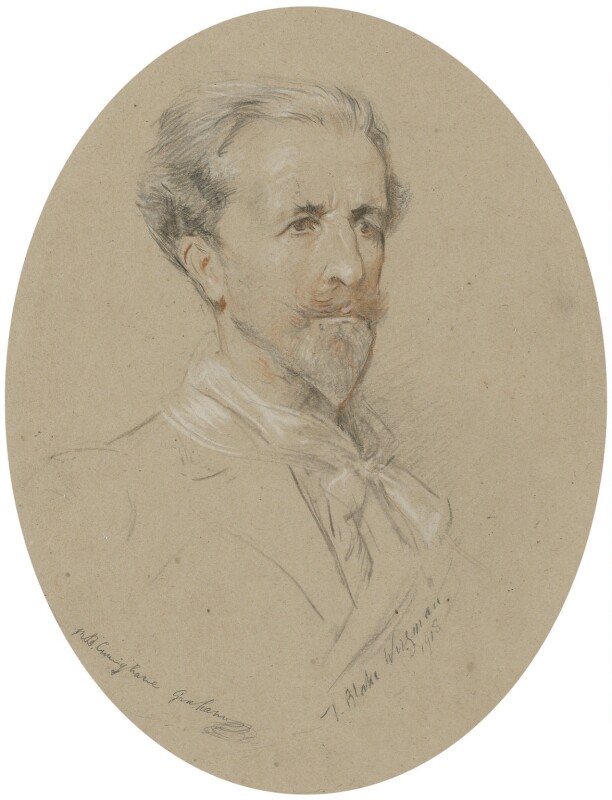 In the years immediately before this portrait was executed, Graham’s special knowledge of South America led him to spend time working there during the First World War. In 1914–15 he was in Uruguay buying horses for the British Army and in 1917 in Colombia, inspecting possibilities for establishing meat-processing factories to supplement dwindling supplies in Europe. At the General Election of 1918 he fought a highly controversial – and ultimately unsuccessful – campaign, not as a Socialist as in the 1880s, but as a non-coalition Liberal candidate for Stirling West, his local constituency.

This 1918 drawing is little known, overlooked in the spectrum of fine images inspired by Graham’s looks and personality. ‘Probably no man has ever been so often painted and modelled as he, for no artist could see him without longing to have him as a model,’ wrote his biographer Aimé Tschiffely.[1]

It is a good likeness but the hesitant, scratchy use of chalks betrays Wirgman’s 70 years. Theodore Blake Wirgman was a portrait painter and illustrator who had made his name in the 1880s with chalk portraits produced for the Graphic.[2] The old-fashioned, vignetted format of NPG 2212 reflects his mid-Victorian formation. His portraits typically incorporate the sitter’s signature as well as the artist’s (see John Everett Millais [NPG 1711] and Joseph Edgar Boehm [NPG 5414]), and the date, arranged into an oval composition, as here.[3] The neckscarf was part of Graham’s distinctive, American-style riding outfit.

The drawing was part of a gift of 14 portraits from the collection of Sir Edmund Gosse, given to the National Portrait Gallery by Lady Gosse after her husband’s death in 1928; Gosse called Graham ‘a wild delicious friend’ and a ‘beau sabreur [swordsman]’.[4] In 1928 the sitter was very much alive, and the drawing was accepted on condition that it was not displayed in his lifetime.[5]

Sir Edmund Gosse; presented in his memory by Lady Gosse and family, October 1928.