19 of 102 portraits by Sir Francis Grant 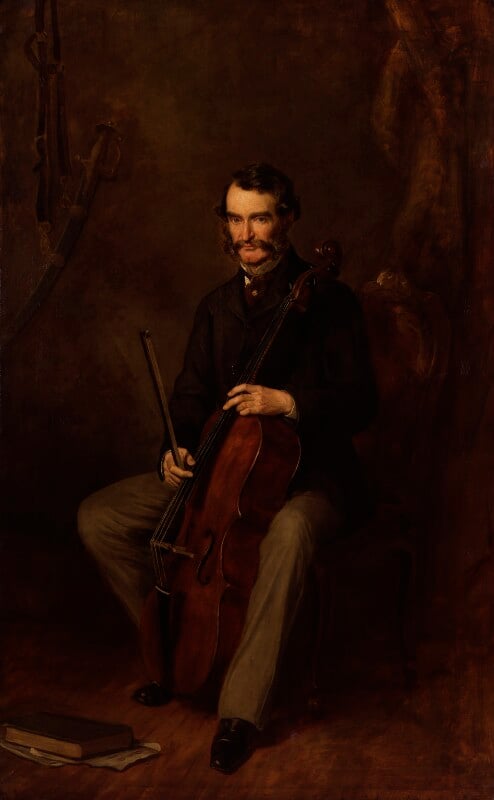 According to a list of portraits of Grant drawn up by his nephew, Charles Grant (included in an album in the collection of the 9th/12th Royal Lancers), this portrait was painted in the artist's studio. The sword on the wall behind Grant is a Sikh tulwar, which he frequently wore. He is shown playing a violincello on which he was a first-rate performer. In 1841 his musical skill helped to secure him a command under Lord Saltoun, an ardent lover of music. A photograph by Rodger of St Andrews, apparently dating from 1861 (example in the album belonging to the 9th Lancers), also shows Grant playing a violincello, and is similar in pose to the NPG portrait, though the angle of the head is different. 'A sketch with fiddle', now untraced, was said by Charles Grant to be in a scrapbook at Kilgraston in 1876. The date of the NPG portrait is not certain. Rinder suggests that it was the portrait exhibited at the Royal Scottish Academy in 1865, but there is no conclusive evidence. If the inscription on the back is contemporary with the portrait, it would mean that it must have been painted after March 1866, when the artist was elected president of the Royal Academy, and later knighted. Sir Francis Grant's date in his 'Sitters Book' provides no certain solution, since another portrait of his brother is listed under the year 1868 (now in the United Service Club), although exhibited at the RA in 1862. This last portrait was apparently painted on Grant's visit to England in 1861, when the NPG portrait may well have been begun, if not finished; Grant's apparent age and the evidence of other portraits (including the photograph of 1861 discussed above) supports the earlier dating.

The artist, purchased from his son, Colonel Frank Grant, 1888.