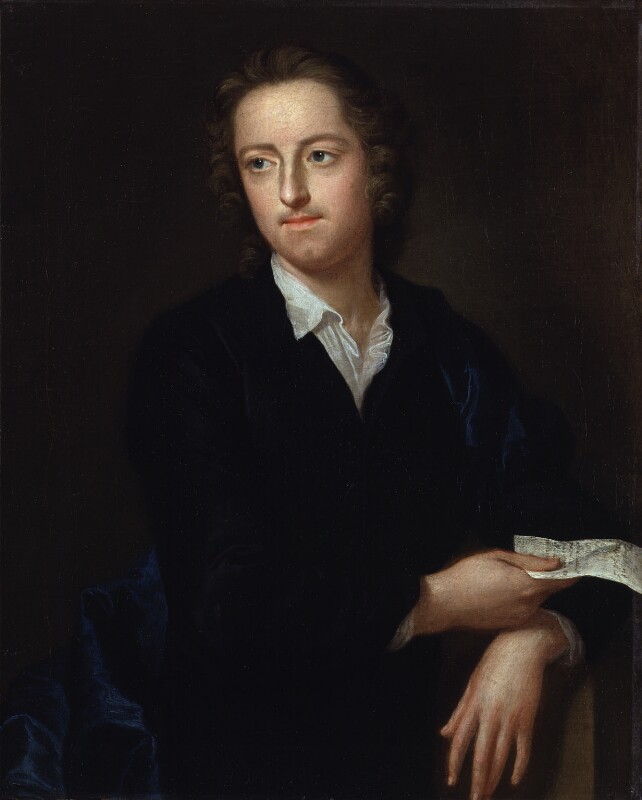 An old manuscript label, in ink, stuck to the stretcher, reads: Thomas Gray/by Eckardt/1750; it is in the same hand (unidentified) as on NPG 988; [1]
Second Exhibition of National Portraits, South Kensington, 1867 label, now torn and illegible, removed to the picture dossier, 1933.

NPG 989, the first certain portrait of Gray, was painted for Walpole by John Giles Eccardt, an artist of German origin who settled in England and worked with Vanloo from at least 1742. [1] The dates 1750 in the Strawberry Hill sale catalogue and 1747 given in the NPG short catalogue are incorrect. In a letter dated 10 September 1771 following the sitter's death on 30 July, Walpole wrote to his friend the Rev. William Cole, the antiquary, offering to James Brown, Master of Pembroke and Gray's executor, 'a copy of a small picture I have of Mr Gray, painted soon after the publication of the Ode on Eton ... and after his [Brown's] death I will beg it may be bequeathed to his college'. [2] The ode was published in the summer of 1747. Gray's comment in a letter to Wharton dated January or February 1748, that a friend carried him to the Grand-Masquerade and desired him to sit for his picture is usually taken to refer to the Eccardt portrait. [3] If this is so, Walpole's 'soon after' must extend into 1748. The 'copy' offered to Brown is still at Pembroke.
The original (NPG 989) was one of the portraits by Eccardt 'from Vandyck' in the Blue Bed Chamber at Strawberry Hill [4] and must certainly have been there by 18 May 1754 when Walpole wrote to Bentley: '... In each panel round the room is a single picture; Gray's, Sir Charles Williams's, and yours, in their black and gold frames; mine is to match yours ...’ [5] The portrait of Gray, no doubt due to his love of music, [6] is based on the Vandyck of Liberti, the celebrated organist of Antwerp Cathedral, now in the Munich Alte Pinakothek. After listing it in 1784: 'Mr Thomas Gray; taken from the portrait of a musician by Vandyck, at the Duke of Grafton's', Walpole further noted that it included '... this motto, alluding to his Ode on Eton, which though one of his best productions, was his first published, Nec licuit populis parvum te, Nile, videre'. [7] The portrait of the writer Richard Bentley (1708-82) shows him holding in one hand 'his own design of the figure of Melancholy, drawn by him for the edition of Mr. Gray's Odes'. [8] Williams' portrait is discussed under this sitter, below. At the time of the 1842 sale, the portraits were still in the 'fine old carved' frames noted by Walpole in 1784 '... black and gold, carved after those to Lombard's prints from Vandyck, but with emblems peculiar to each person'. The present gilt frames, as Adams points out, [9] date from at least 1867 when NPG 989 and 988 were in the Exhibition of National Portraits, and photographed, that year. The frames which were masked out can be seen in the negatives (V & A archives) and are clearly not those described by Walpole. General Sir Henry Jackson, descendant of the Thorntons, former owners, believes it unlikely that they were changed by his ancestors. Repairs were carried out in 1962.
A photograph of a whole length oil (Witt Library), probably small and with face mask similar to NPG 989, has Thomas Gray on the stonework, right. The composition, with landscape background, is reminiscent of Carmontelle's literary portraits (see Laurence Sterne, NPG 2785). Unknown before the late 1930s when owned by G. A. Plimpton, New York, it may prove to be a pastiche.

Dirty, perished varnish; many discolourations presumably from retouchings; a grey bloom under the chin; pin holes in corners.

A plate, believed destroyed, was engraved by J. Miller for the frontispiece to Designs by Mr R. Bentley for Six Poems by Mr T. Gray, 1753, and sent to the poet who apparently instructed that it be suppressed; numerous copies were however preserved. [1] For later engravings, see F. O'Donoghue and Sir Henry M. Hake, Catalogue of Engraved British Portraits ... in the British Museum, 1908-25.