2 of 14 portraits of Thomas Gray 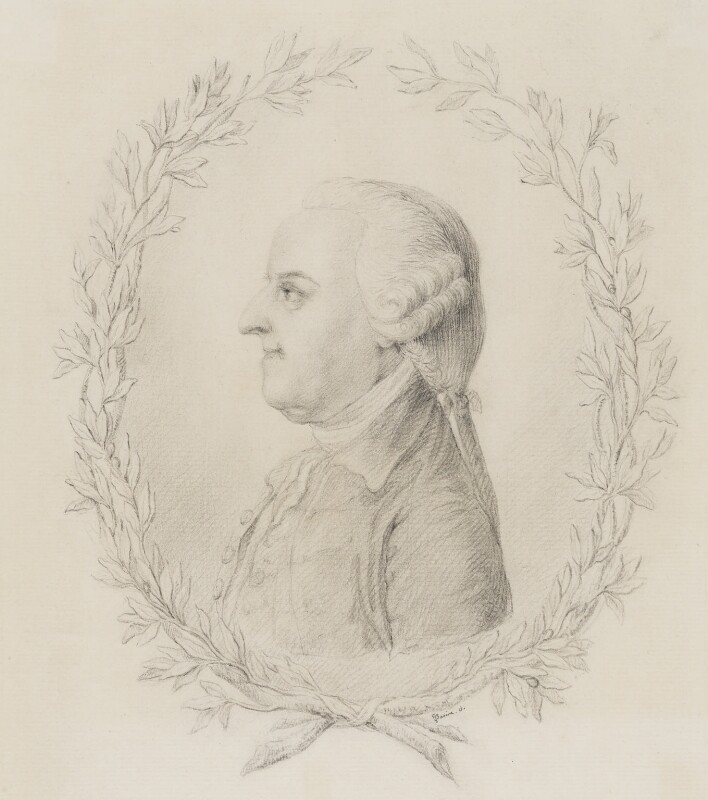 Signed in pencil below the wreath, centre right: J Basire d., the JB in monogram.

Though it cannot be from life, NPG 425 is of better quality than Basire's engraving [1] which, as shown by the lettering W. Mason & B. Wilson Vivi memores delineavere, also used the Wilson derivative from Mason's profile type (see All Known Portraits). A similar drawing in the Hurd episcopal library at Hartlebury, also with wig and two rows of curls, has the queue disappearing behind the collar. This may be by, or after, Mason. A pen and brush drawing, similar but reversed, pasted in the margin of a large scrap-book at Nuneham is inscribed Mr Gray drawn by Mr Mason. Seen there and traced by Scharf, 3 December 1880, it has been suggested as the drawing, known through engravings by Trotter and Smith, formerly owned by the Rev. M. Potter of Scarning, Norfolk. If this is correct, the engravers used considerable licence. For his engraving Basire may also have used a drawing by the Rev. Michael Tyson made, according to a letter to Gough, 1 January 1775, 'from the shadow and my own ideas of Mr. Gray, very soon after his death'. He continues that Mason did not think it a good likeness but if 'Basire is still desirous of having it, it shall be sent'. [2] Nothing is known of this drawing and there is no engraving of it, but it appears that Basire considered Tyson's suggestions. On the 19 February Tyson wrote to Gough, 'The engraving of Gray does Basire great honour indeed - not so the Draughtsmen. I think it is a good caricatura likeness - but that smirk should be removed. - I shall send Basire my strictures; but I could very little touch it up, as I could not remove the shades.' Gough replied, 'Your idea of Gray's Portrait was very just: Basire says, Mr. Mason will permit it to be adopted; otherwise it will really be a Caricature.' [3] William Cole, who saw Tyson's drawing and thought it was copied from Mason, [4] also implied that Tyson was involved in the Basire engraving. He noted that a print of Scipio in the arbour in a Dutch edition of Gil Blas, 'was so like the countenance of Mr. Gray, that if he sat for it, it could not be more so ... It is ten times more like him than his print before Mason's life of him, which is horrible, and makes him a fury. That little one done by Mr. Mason is like him; and placid Mr. Tyson spoilt the other by altering it' [5] All the early editions of Mason's Life contain either the Basire engraving of the Mason and Wilson type or the Doughty engraving. Cole must be referring to Tyson's contribution to the Basire engraving.

Profile; prominent beaked nose, compressed lips, high forehead, wig tied in a queue with two rows of curls over the ear; coat unbuttoned with collar turned down; all within two semi-circular boughs of bay open at the top; lit from the left, the background lower half, in shadow.

Slightly rubbed; discoloured area 9 ¼ x 8 in. where exposed to light; the paper originally white, is now slightly pink; glue stains and pin holes at the corners; a later mount replaces one shown in a photograph received 19 December 1889.