A Consultation prior to the Aerial Voyage to Weilburg, 1836 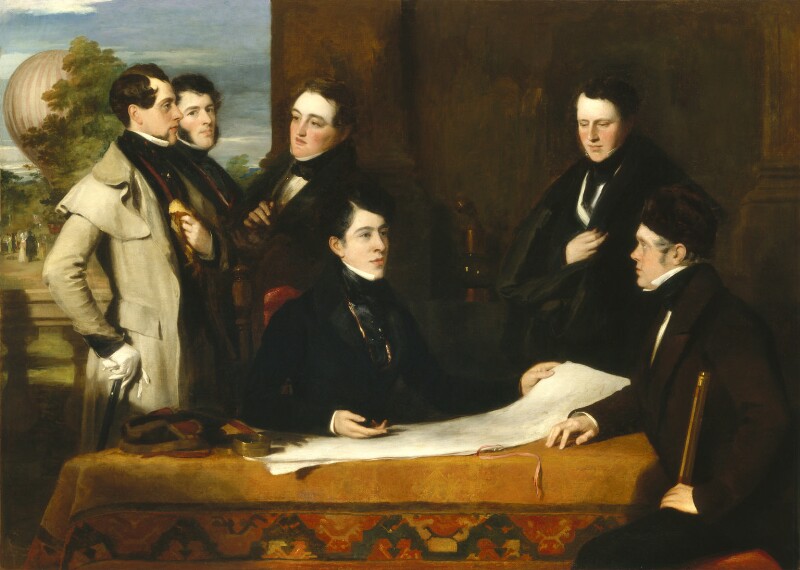 A Consultation prior to the Aerial Voyage to Weilburg, 1836

On 7-8 November 1836, Thomas Green, the celebrated balloonist, Thomas Monck Mason, the author of Aeronautica, and Robert Hollond, the lawyer and MP, made an important voyage from London to Weilburg in the well-known Vauxhall balloon, lent for the occasion by the proprietors, Gye and Hughes; the distance of about four hundred and eighty miles took eighteen hours, a record not beaten for a voyage from England till 1907. The voyage was made at the expense of Hollond who was passionately interested in ballooning (he made his first ascent in 1830 with Green's son). It was undertaken mainly in order to test a more elaborate form of guide-rope invented by Green. Provided with numerous scientific instruments, lavish supplies of food and wine, and parachutes for dropping communications and fireworks in case of a landing in the dark, the ascent was made from Vauxhall Gardens at about 1.30 pm on 7 November 1836. The English coastline was reached about 4.30 pm, and the crossing of the channel took place in darkness (the first crossing by Englishmen at night). From Calais, the balloon passed over Ypres, Lille, Brussels, Namur, Liege and Spa, crossing the Rhine about 6 am. A safe landing was made in a field in the valley of Elbern, about eight miles from Weilburg in Nassau, at 7.30 am. The balloonists were entertained in Weilburg in honour of their adventure, and the balloon itself was ceremoniously re-christened 'The Great Balloon of Nassau'. In England, news of the record aerial flight caught the public imagination, and it was hailed as a great achievement of aerial navigation. The voyage is described in detail by Thomas Monck Mason, Account of the Late Aeronautical Expedition from London to Weilburg (1836), and in his Aeronautica (1838), pp 29-98 (with accompanying illustrations). Hollond's original log of the voyage was in a catalogue issued by T. Thorp of Guildford (no.326, 1919, item 4), apparently bought at the sale of Mrs Hollond's effects, Wonham House, Bampton, Devon, in December 1916. See also J. E. Hodgson, The History of Aeronautics in Great Britain (1924), pp 250-4.
The group represents from left to right: Walter Prideaux (1806-89), a lawyer and poet; John Hollins (1798-1855), the artist; Sir William Milbourne James (1807-81), another lawyer and later lord justice; Robert Hollond (1808-77), a lawyer and MP; Thomas Monck Mason (1803-89), the author of Aeronautica; and Charles Green (1785-1870), the famous balloonist. Prideaux and James were friends of Hollond (all three men were lawyers), and apparently interested in ballooning, hence their inclusion in the group. The picture shows the three men who actually made the journey on the right, discussing their route with the aid of a map. Also on the table is a fur cap with ear-pieces and a compass, while Green is wearing a cap and holding a telescope. Visible on a ledge behind is a lantern. On the left are Hollond's two friends and the artist, very much in the role of spectators. In the background on the left the Vauxhall balloon is visible, with various figures surrounding it.
No record of Hollond's relations with Hollins survives (enquiries to the Hollond family have not so far yielded any documents or letters). However, the artist was evidently well-known to this aeronautical group; he painted an independent portrait of Green in 1837, formerly in the collection of Hollond, and a portrait of Mrs Robert Hollond, exhibited RA, 1841 (184).
The NPG picture was engraved by J. H. Robinson, published H. Graves, 1843 (example in NPG). The engraving shows several details much more clearly than the painting which has suffered from bitumen and restoration. The head of Hollond is particularly badly affected, having lost most of the modelling in the features. The picture has also darkened, and parts of it have been over-painted, most obviously the sky.
Apart from Green, none of the other sitters is represented in the NPG by individual portraits.

Mainly fresh complexions, brown eyes and brown hair. Three figures on right dressed in black stocks, white shirts and black or brown coats; the figure of Mason, second from right, also in a black cloak; the figure of Green on the extreme right in a brown cap holding a telescope. The three figures on the left also in dark stocks, white shirts and dark coats; the figure of Prideaux on the left in a grey overcoat, wearing white gloves and holding a yellow handkerchief(?) to his breast, carrying a stick. Table in foreground covered with heavy orange-brown cloth, with a mainly black and red patterned border. On the table is a cap with ear-pieces, a metal compass, and a large map (no details visible). The background behind the three seated figures is very dark brown, with a pillar faintly visible on the right, and a lantern in the centre. On the left is a grey balustrade, with behind a view of Vauxhall Gardens (fresh green), the crimson and white striped balloon and a blue sky.

Commissioned by Robert Hollond; by descent to E. R. Hollond; sold by his executors, Christie's, 6 March 1970 (lot 71), and purchased there.