30 of 3125 portraits matching these criteria: 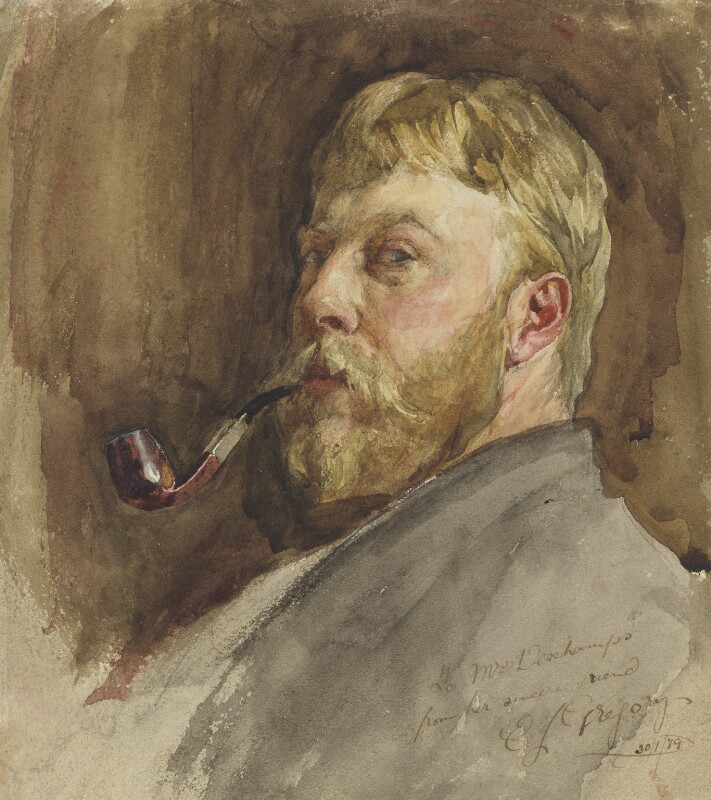 The watercolour is dedicated to Christina Deschamps, née Dodds (1845–1926).[1] She was the wife of Charles William Deschamps (1848–1908), the nephew and assistant of the art dealer Ernest Gambart. Deschamps moved to London at the siege of Paris in 1870, became Secretary of the Society of French Artists, and exhibited Paul Durand-Ruel’s Impressionist pictures at his gallery in New Bond Street. Although he made a reputation as a dealer in modern art he continued to support some of his uncle’s ‘establishment’ artists such as Lawrence Alma-Tadema.[2]

As a painter of modern life with a fairly academic technique Gregory would have fitted in somewhere between these poles. In 1879 the Deschamps gallery showed his Dawn (1876) and with this painting he became instantly famous.[3] NPG 2621 is also dated 1879, and Gregory would have had every cause to express gratitude to the dealer via this present to his wife.

Judging by his iconography Gregory seems to have been interested in the process of self-portraiture. Unfortunately much of it is now untraced, dispersed at the death of his Manchester patron Charles Galloway.[4] His gift was recognized though, and ‘early in his career Gregory was invited to contribute his portrait to the Uffizi Gallery at Florence, but never finished one to his satisfaction’.[5]

NPG 2621 was first offered to the NPG in January 1913 by Mr Cecil Cremetti. The second time it was offered – as a gift by Mr Harold Hartley in 1933 – Gregory was no longer subject to the Gallery’s ten-year rule, and the portrait was accepted for the Collection.[6]

1) Maas 1975, p.293.
2) Alma-Tadema painted a double portrait of the Deschamps as a wedding present in 1874; see Swanson 1990, cat.166 (ill). Swanson (or Alma-Tadema) calls Christina ‘Catherine’. Maas (1975, p.293) provides dates and a surname and has been adopted as the reference for the purposes of the current catalogue.
3) ‘[Gregory’s] first important oil-picture, “Dawn,” appeared at a gallery in Bond-street formerly conducted by Mr Deschamps, and represented with extraordinary truth and force of colour the blue light of early morning breaking through the blinds of a ball-room window’: ILN, 12 May 1883, Fine Art Supplement, p.469. ‘By the remarkable picture known as “Dawn” which was shown at Mr Deschamps’ gallery some eight years ago, it became evident that Mr Gregory’s peculiar skill was in the discerning of all that is most artistic and all that is most piquant in the modern life of cities’; MA, 1884, p.354. In 1912 the painting belonged to J.S. Sargent.
4) Two watercolour and three oil self-portraits were sold at the Galloway sale, Christie’s, 24–26 June 1905.
5) Meldrum 1912.
6) ‘I bought it at Christie’s 2 years ago for £5, and can send it up for you to see. I am quite prepared to give it to the Gallery for he was a dear friend of mine and, I feel, quite worthy of a place in this Gallery.’ Letter from H. Hartley to H.M. Hake, 20 Mar. 1933, NPG RP 2621.

Head-and-shoulders to left, looking back over his shoulder, smoking a pipe, predominantly brown background.