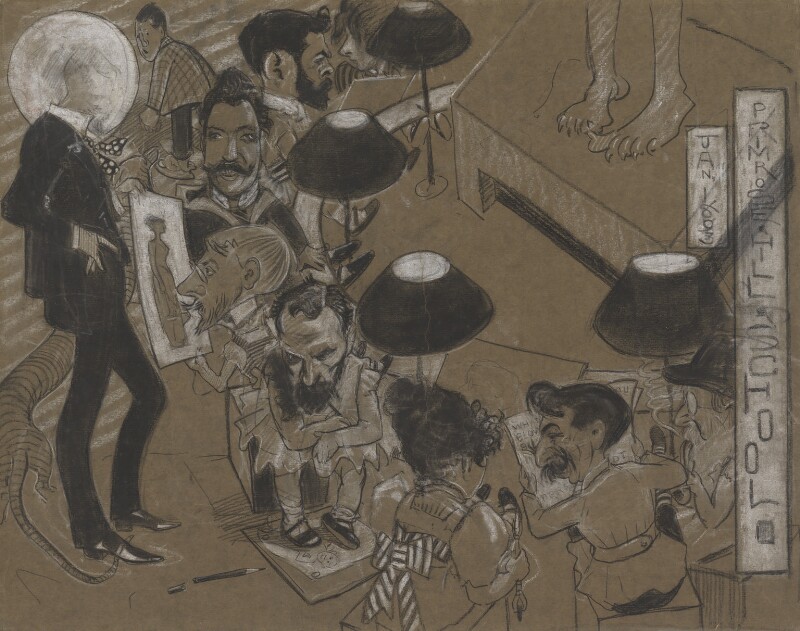 There is no record of a Primrose Hill art school in London in the 1890s and this caricature is probably a skit on the famous St John’s Wood Art School, but featuring the artist community of the Primrose Hill Studios. In the drawing the ‘school’ is a classroom full of adults dressed as children (in pinafores, ankle socks, etc.) seated on crates at a semicircular bar facing a model on a dais. On the left stands Sydney Prior Hall, his features dissolved in a halo of light, holding out a figure drawing, its academic rigour a deliberate contrast to the giant, claw-toed model the ‘children’ are drawing. [1]

Primrose Hill Studios, built in 1877, was a development of twelve artist houses in a mews off Fitzroy Road, Regent’s Park. It was a popular address: ‘a total of 39 artists worked at Primrose Hill Studios from 1878 to 1899’. [2] Some also lived there with their families and ‘the courtyard around which the houses were built inspired a camaraderie reflecting the egalitarian art-worker ideal promoted by Ruskin and Morris’. [3] Many went on to become members of the St John’s Wood Arts Club (inaugurated 1895), which explains how the drawing came to the National Portrait Gallery with other club material in 1964. [4]

Of the eight figures identified at least two had, or had exhibited from, Primrose Hill Studios addresses in 1893. [5] Maurice William Greiffenhagen (head-and-shoulders, profile to right with dark hair) worked at No.3 and Ernest Albert Waterlow (head-and-shoulders, profile to left wearing spectacles) exhibited from No.6. This studio was actually occupied by John William Waterhouse from 1888 to 1900. Waterhouse is at the centre of the composition, seated and wearing a child’s dress. As an Associate of the Royal Academy and tenant of various Primrose Hill studios since 1878, he was a leading member of the community. From 1892 he had also been a monthly visitor to the St John’s Wood Art School. [6] He became a member of the St John’s Wood Arts Club in 1900. The flower painter Esther Kenworthy Waterhouse (1857–1944), his wife,[7] is shown seated between him and Arthur Hopkins.

Of the other figures in NPG 4405, Waterlow and Walter Dendy Sadler were both founder members of the St John’s Wood Arts Club in 1895; Greiffenhagen joined in 1896. Also identified, at extreme right, is the wildlife painter Joseph Wolf (1820-99), who had lived at one of the studios since the mid-1870s. The unidentified woman at centre top might be Maria Isabel Naylor or Rose McKay, artists who lived at No.7 Primrose Hill Studios in 1893. [8]

The drawing was originally accepted as a caricature by an unidentified artist of ten unnamed members of the St John’s Wood Arts Club. It is a large, boldly handled work, and eventually it should be possible to identify the artist as well as each one of the sitters.

Given by Colonel A.C.B. Clayton on behalf of the St John’s Wood Arts Club, 1964.