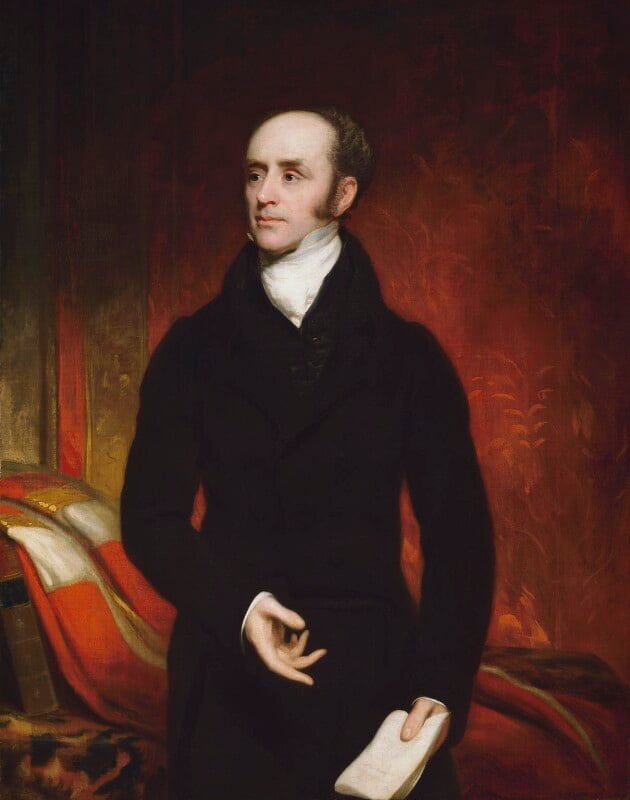 Phillips painted two almost identical portraits of Grey in 1810-11, and three portraits are recorded in his 'Sitters Book' (copy of original MS, NPG archives), under the years 1820 and 1821; these almost certainly represent a new portrait-type and are not further versions of the 1810 portrait. The 1820 portrait was a half-length, recorded in the 'Sitters Book' as being that exhibited RA, 1820 (51), and commissioned by a Mr Lambton. Under 1821, Phillips records two portraits commissioned by Earl Fitzwilliam - a three-quarter length and a kit-cat. The present Earl Fitzwilliam remembers having only one portrait which he sold around 1950; he described it in a letter of 8 August 1966 (NPG archives) as being almost identical with the head and shoulders of the NPG portrait, and its size as roughly 30 x 24 inches (76.2 x 61 cm). Although not technically large enough for the kit-cat size (36 x 28 inches), the Earl's portrait can be assumed to be the kit-cat recorded by Phillips. The size of the NPG portrait suggests that it could be the three-quarter length portrait also recorded under 1821. The style points almost conclusively to Phillips as the artist (there is no doubt that it represents Grey), and the year 1821 agrees excellently with Grey's costume, his apparent age, and other portraits of known date. There is no other evidence to show how the portrait commissioned for Earl Fitzwilliam could have come into the collection of Mr Kersley, but the NPG portrait is certainly not Mr Lambton's half-length portrait (now unlocated). The NPG portrait shows Grey standing in front of his 'peer's robes', and a volume entitled ... [?] of England.

Dark eyes, brown hair. Dressed in a white stock and shirt, black waistcoat and coat, holding a white piece of paper. Red, ermine and braid robes, and a brown leather-bound book on table behind with multi-coloured cloth. Red-figured material behind at right and in the centre, strips of it at left between brown panels.