2 of 64 portraits of Frederick North, 2nd Earl of Guilford 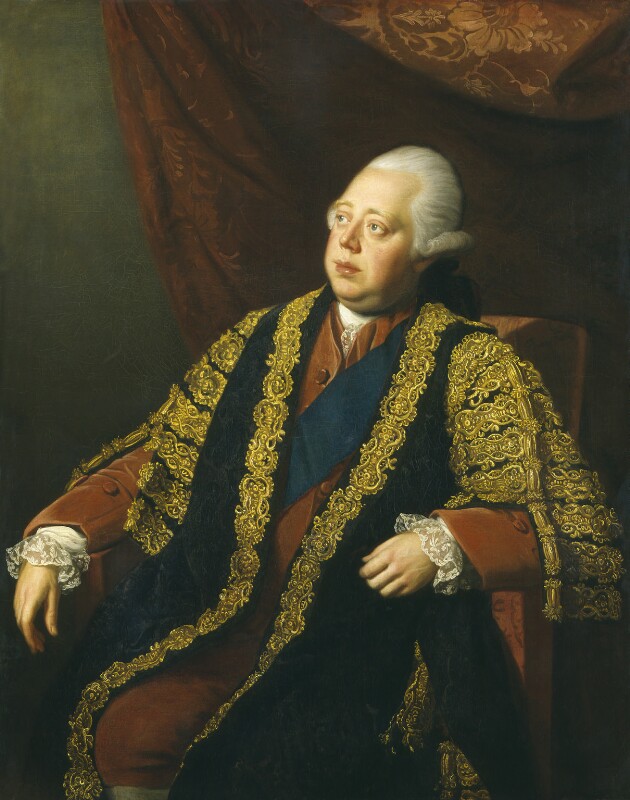 The lining canvas inscribed in a 19th-century hand: Fredk./2nd Earl of Guildford.

The standard portrait of Lord North, skillfully accommodating his physical clumsiness and the dignity of his office as chancellor of the University of Oxford. He had been installed in July 1773 [1] (having received the Garter the previous year), and the first of many engravings of the portrait was published on 23 May 1775. A medal by John Kirk after Isaac Gosset was also struck in 1775 to mark the election of the new chancellor.
NPG 3627 appears to be wholly by Dance, but may be a replica of the portrait at Waldershare Park. [2] Many copies are recorded, including those at the Bodleian Library, Oxford (given in 1805); [3] Trinity College, Oxford (bought in 1817); [4] the Carlton Club; Dalmeny (Rosebery sale, Christie’s, 5 May 1939, lot 36), and another was offered by Graves to the NPG in 1891. [5] A half-length version was engraved by R. H. Cromek in 1802 from a picture belonging to Sir Grey Cooper (d. 1801). [6]

Blue eyes, white powdered hair with a black ribbon; wearing a chancellor’s black gown with gold facings1 and the ribbon of the Garter over a light brown suit; white stockings.

1 The gown might equally apply to the chancellor of the University of Oxford or to the chancellor of the exchequer; Huddesford’s whole-length portrait of North’s predecessor at Oxford, Lord Lichfield (illus. Illustrated Catalogue of a loan exhibition of Portraits of English historical personages who died between 1714 and 1837, exhibited in the Examination Schools, Oxford, 1906, f.p.69) shows a rust-coloured suit beneath the chancellor’s gown.

By family descent at Wroxton Abbey; the Trustees of the North Settled Estates sale, Christie’s, 19 March 1948, lot 1, bought Leggatt for the NPG.

1 It is possible that this was the portrait now at Waldershare Park.