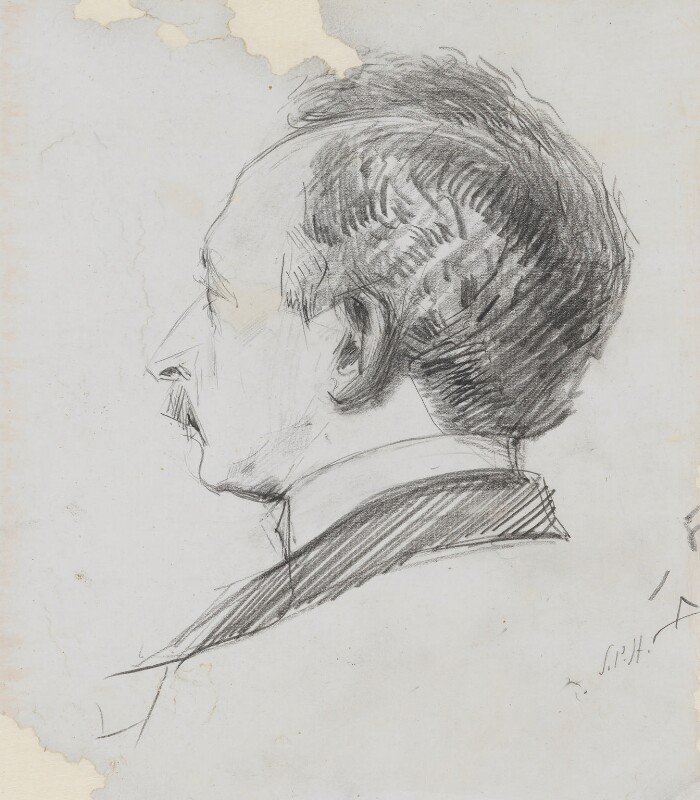 This is a study for NPG 4404, which shows Hacker taking a silhouette of Lawrence Alma-Tadema for the frieze on the wall of the St John’s Wood Arts Club room, after the inaugural supper on 30 January 1895.[1] According to Marion Harry Spielmann, the ‘first act’ of the new club was to appoint a decorations committee, whose tasks included ‘a frieze bearing the shadow portraits of members’.[2]

Sydney Prior Hall was a leading illustrative journalist who worked for the Graphic from its foundation in 1869 (see NPG D1393). The NPG collection contains over 140 portrait sketches by him of political, legal and artistic figures, plus two royal portrait groups.

The drawing was originally framed together with the studies of Tadema (NPG 4388) and John Collier (NPG 4390) by Hall. Now laid down, NPG 4389 is damaged along the edges and discoloured from a previous mount or frame.

Head-and-shoulders, profile to left, seen from over left shoulder.

See crayon and paint drawing by Sydney Prior Hall; {NPG 4404}.