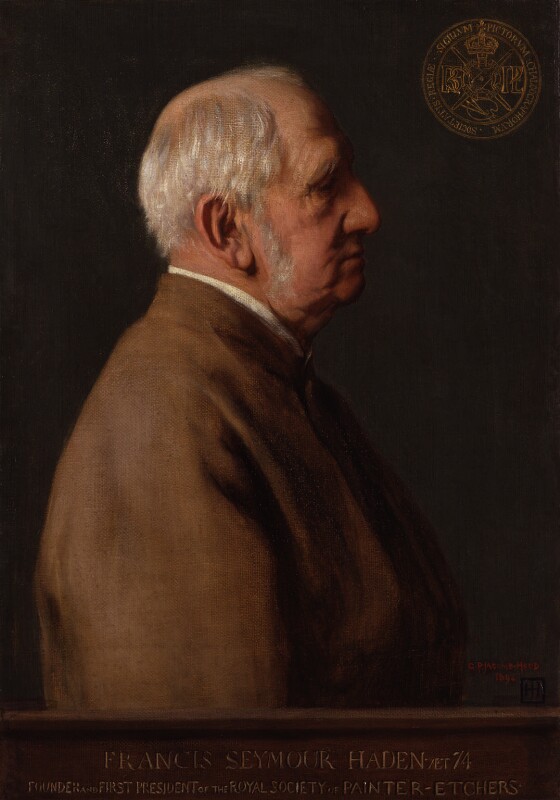 This is the second of two portraits of the sitter executed by George Jacomb-Hood. Early in 1892 Jacomb-Hood was commissioned by the Royal Society of Painter-Etchers (RE) to paint the portrait of Haden, the society’s president, then aged 73, and in addition to the ‘official’ or premier work, produced this smaller, less formal image.

Haden began etching in the 1840s and from 1857 practised seriously, though officially as an amateur. His subjects were chiefly landscape studies, characterized by a selective use of line and the appearance of a spontaneous sketch. [1] He worked alongside James McNeill Whistler and was influenced by the Société des Aquafortistes, founded in 1862. In 1864 the critic Philippe Burty described Haden as ‘un des aquafortistes les plus considérables de l’école anglaise’, singling out his two Salon exhibits [2] and going on to devote a long article to Haden’s oeuvre, complete with a catalogue detailing 28 works. [3] Subsequently, spurred by a solo exhibition at the Fine Art Society in 1879, by the rising status of original etching in Britain thanks in part to the works of Whistler, and by frustration at the continuing refusal of the Royal Academy to elect printmakers as well as reproductive engravers, Haden was the moving spirit behind the formation of the RE, whose inaugural meeting took place at his house on 31 July 1880. Seven artists formed the original membership, augmented in 1881 by 65 others, including Jacomb-Hood. Annual exhibitions took place and over a decade Haden succeeded in establishing the RE as a feature of the British art scene, notable practitioners including Alphonse Legros, Hubert von Herkomer, William Strang and Frank Short. The exhibitions also included works by artists outside Britain.

Haden retired from the active practice of surgery in 1887, at around the time that he told James Clarks Hook that his services to science had been ‘greater than my services to Art’. But, he added, the latter included his major contributions to ‘the revival (by means of the Society which I have founded) of Painter-Engraving; and to the revival (of which I have ample evidence) of the Old Master Exhibitions in the R. Academy – in a word to bringing before the public a better acquaintance with the higher forms of Art’. [4]

As RE president from its inauguration, by all accounts Haden proved an autocratic leader, ‘intolerant’ of others’ opinions. [5] In 1895 a commentator wrote, ‘He (Haden) created the society. He has compelled many people to become members of it. But he also drove out all the obnoxious characters who once belonged to it, obnoxious, that is, from his point of view. In fact, he is the society.’ [6] The same qualities were, however, valuable in promoting the RE, which thanks to his efforts was enabled to adopt the title Royal Society of Painter-Etchers in October 1888. The following year’s RE exhibition included a total of 144 plates by Haden, constituting a retrospective. It appears that he made no secret of his desire that as RE president he should receive a knighthood, which was eventually bestowed in 1894. Three years earlier, on 14 May 1891, the RE had agreed that all members be asked to contribute an etching each for presentation to Haden in recognition of his work for the society. The portrait commission entrusted to Jacomb-Hood was evidently part of the same impulse, which was also marked by Herkomer, who executed an etched portrait shown at the 1892 RE exhibition.

On receiving Jacomb-Hood’s request for a sitting, Haden replied on 28 February 1892 from his home, Woodcote Manor near Alresford:

My dear Mr Jacomb-Hood
I shall, I need not say, be both flattered & gratified to go down to posterity under the aegis of so potent a craftsman as all the world – myself included – know you to be, & am, I assure you, much touched by your generous offer to undertake me – into the bargain. Singularly enough, and without, of course, having the least idea of the action about to be taken by the Society, Herkomer came down here the other day and made three Etchings of me with one of wh. he tells me he is satisfied & I believe he intends to send to the Exhibition & present to any Fellow who will accept it. So you see all my honours are coming at once. You will, I think, enjoy a visit to this place when the young leaves are out & we shall be delighted to receive you and drive you about the country.
Yours sincerely
F. Seymour Haden. [7]

Haden’s letter implies that sittings took place in early spring, at Haden’s home in Hampshire, as is confirmed in Jacomb-Hood’s memoirs. Here he describes Haden as ‘a flourishing and very clever surgeon … equally well known among collectors as a talented etcher’ [8] and founding member of the RE, Haden’s ‘pet scheme’ to which ‘he gave a great deal of energy and time (as well as money, I expect, in buying every exhibitor’s etchings).’ [9] Jacomb-Hood’s somewhat digressive account of the sittings includes this description of Haden’s appearance and temperament: ‘Haden, whose head was a fine one, with deep-set eyes with rather drooping lids, a prominent and determined nose, with firm-set mouth, was a man not easily argued with or turned from his purpose.’ [10] He added

He was a very kindly and helpful man to me in early days, and I treasured a beautiful little trout rod, made by himself, which he had given to me. One afternoon while I was painting him, and Lady Haden was out, I was much alarmed by his having a sudden seizure of an apoplectic nature – one of the earlier signs of his death a few years later. I got him into an arm-chair, unbuttoned his collar, and bathed his head with cold water, and was much relieved in bringing him round. On his recovery, he said: ‘As a doctor I know what this means, my dear Hood. I cannot live another year.’ But he did live for some years afterwards and I never heard of another attack. One portrait I painted of him then is now in the National Portrait Gallery. [11]

The premier portrait, which entered the RE collection, shows Haden facing forwards, seated among prints and etching tools (see ‘All known portraits, By other artists, 1892’). As Jacomb-Hood’s recollection indicates, Haden’s ‘fine’ head was especially notable in profile, and it may be that the present work was intended as an initial study for the official portrait, before the more conventional frontal composition was decided upon. Possibly, too, the profile aspect was rejected for the main portrait owing to its similarity to other images of Haden, such as his bookplate by Charles William Sherborn and the mezzotint by Legros (see ‘All known portraits, By other artists, 1880’ and ‘1881’).

Although a subsidiary image, the present work has formal accoutrements in the shape of the insignia of the RE top right, and the carefully lettered inscription across the foot of the canvas, identifying the sitter in his role as ‘Founder and First President of the Royal Society of Painter-Etchers’. It is however, somewhat thinly and sketchily painted, conveying a certain informal quality. Exhibited at the New Gallery in autumn 1892, and probably also (as suggested by a label fragment; see ‘Inscriptions’) at an unidentified location in Germany or Austria, it is thought to have been presented to Haden as a courtesy, and retained by his family until sold at auction in 1918. [12] The premier portrait was shown at the RA in summer 1893.

In his memoirs, Jacomb-Hood made several observations on portrait painting that may be of interest here. ‘Sympathy and a grasp of character and of the most characteristic expression and action’ are essential qualities in a portraitist, he wrote, adding that the artist ‘must have the strength of mind and determination to sacrifice his work and time, should he suddenly be inspired by a happier view of expression or movement.… Above all, one has to make a good picture; a harmonious scheme of colour and atmosphere, and a good design of line and mass ... anxiety to please must not be allowed to spoil the picture.’ [13]