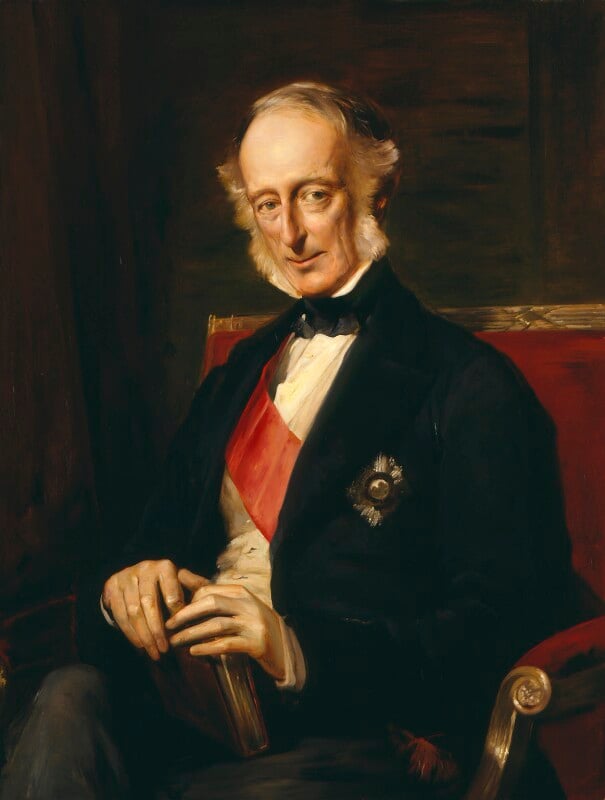 Halifax is shown with the sash and star of the Bath. The original portrait by Richmond is apparently that at Oriel College, Oxford, presented by the 2nd Viscount Halifax, 1924, listed by Mrs R. Lane Poole, Catalogue of Oxford Portraits, III (1925), 316, and in Richmond's 'Account Book' (photostat copy of original MS, NPG archives), p 8, under 1873, exhibited VE, 1892 (11), and engraved by J. D. Miller (example in NPG), engraving exhibited RA, 1886 (1514). Another oil version or copy of this type is in the collection of the present Earl of Halifax, reproduced Country Life, CVI (1949), 469. An earlier drawing of Halifax by Richmond, listed in his 'Account Book' pp 69 and 70, under 1861, was engraved by W. Holl (example in NPG), for the 'Grillions Club' series; the head in this drawing is very similar in pose and features to the head in the oil painting, though suggesting a younger man. A second drawing is also listed in the 'Account Book', p 73, under 1861. The NPG copy was evidently executed for the 2nd Viscount Halifax a short time before its presentation (see his letters of 10 and 18 July 1912, NPG archives).

Presented by the sitter's son, the 2nd Viscount Halifax, 1912.