2 of 13 portraits of Edmond Halley 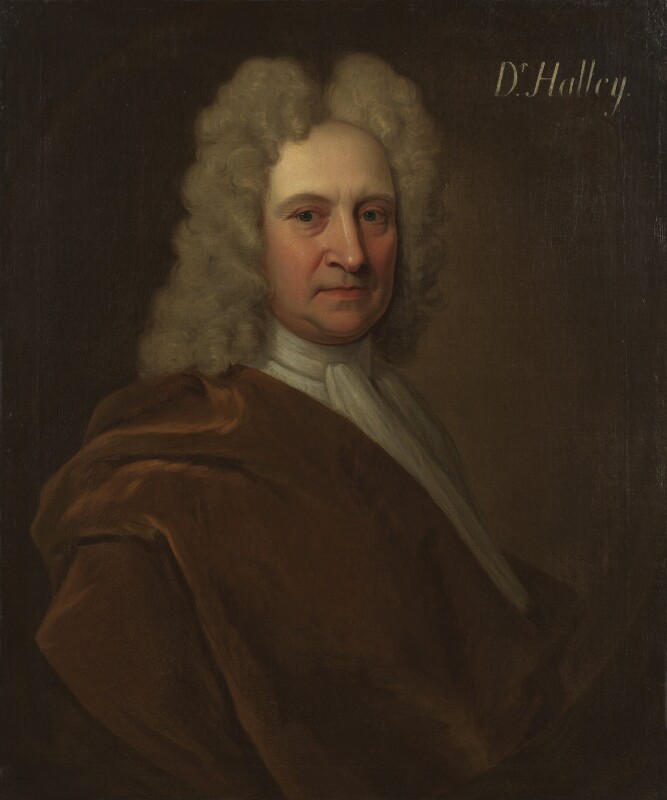 Inscribed top right in script Dr Halley, the D and the H having later additions in the form of serifs over the varnish; these were removed on cleaning.

The design of this somewhat stiffly painted portrait corresponds with the engraving by Vertue published without date or source but entered under the year 1721 in his manuscript list of engravings. NPG 4393 is perhaps no more than a repetition and a more sensitive original may yet emerge. However, on the basis of the artist's most substantial portrait, a whole length of William Lowndes (1652-1724), Bank of England collection, there is little ground for optimism on this score.

A vertical loss running left of the parting in the wig, down into the forehead, and a small damage to his left eye, repaired; lightly cleaned and varnished, 1964.

Bought through Leggatt's, Sotheby's, 21 October 1964, lot 1, the first of four lots from the collection of the Earl of Lucan which had evidently formed, or come to form, a library set. Lots 2, 3 and 4 were of Bolingbroke, Newton and Locke. It is not known who brought them together though the 1st Earl (1735-99) is believed most likely. [1] He and his wife, an amateur painter, were friends of Horace Walpole who mentions them in his Letters from 1776. The suggestion that NPG 4393 may have entered the Earl's collection later than the other three [2] has not been substantiated. The Bolingbroke has since been cleaned and beneath an inscription in small capitals (similar to those noted on the Newton and Locke at the sale) another, earlier one, was revealed in the same hand as that now seen on the Halley. This would suggest that NPG 4393 and Bolingbroke share a common descent, so far not established. It is possible that the lines of descent might also relate to one or more of the Royal Society portraits [3] (see All Known Portraits).