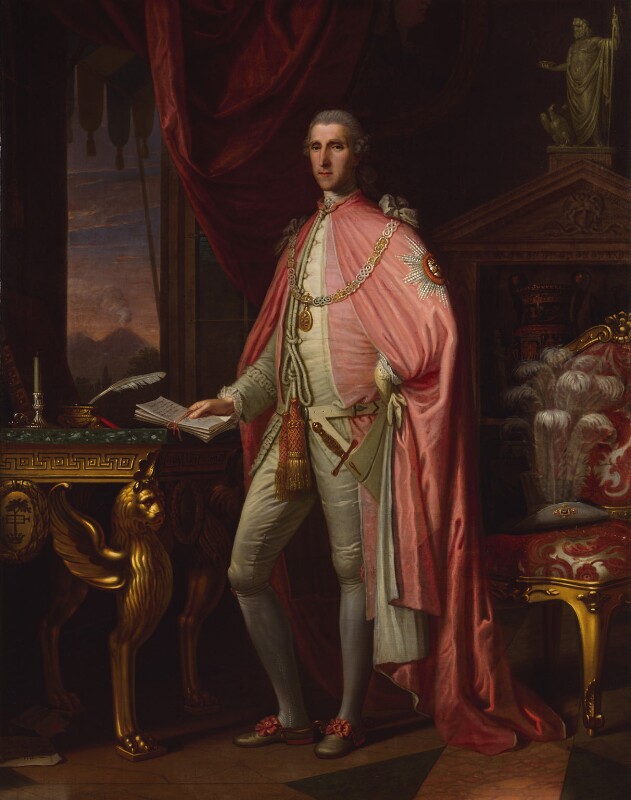 Inscribed on the paper lying on the floor, bottom left: Painted by D. Allan/& by him humbly presented/to the British Museum./Anno.Dom..1775.-

Set, presumably, in the Palazzo Sessa, Hamilton's official residence at Naples, this formal portrait of a distinguished diplomat makes careful reference to ancestry, rank, honours, taste and generosity. It is in marked contrast to the informal portrait of the Hamiltons which Allan had previously painted at Posilippo, and with the later full length by Reynolds (NPG 680).
The circumstances of the portrait are well documented. In 1772 the British Museum had purchased the Hamilton Collection of antiquities, gathered in Naples since 1764, for £8,400. On 6 October 1775 the young Scottish artist David Allan, then on his second visit to Naples during a Grand Tour which had started in 1767, wrote to Dr Maty, Secretary of the Museum, offering the portrait which he had painted out of 'Gratitude and Regard' for Hamilton, 'a true lover and Promotor of the fine Arts and protector of Artists, of which I have had the honour of a very particular share':

'I have indeavoured to do his portraite as well as I can; And considering his great ingenuity and merit in making such a Noble Collection of interesting and beautiful monuments of Antiquity which are at present rightly placed in the B. Museum has induced me to think that a portrait of the worthy collector might very properly find a place in that collection, on this consideration I have ventured to offer the picture to the Directors, which if they thought the weak performance worthy of being put up with this collection, would do me an honnor and be of service to me as the work woud be seen, and I should be very happy if the picture should not be thought unworthy of their acceptance' [1]
The portrait was accepted and on 1 March 1776 the Museum's General Committee were told it was in London. [2] But the artist’s hopes of his work being seen were soon to be disappointed. In February 1782 Hamilton presented to the British Museum his portrait by Reynolds (NPG 680) and Allan’s portrait was consigned to storage, which it only left upon being transferred to the NPG in 1879.

Blue-grey eyes, grey powdered hair, wearing the ceremonial dress of a Knight of the Bath: gold collar and badge, pink cape over a silk white suit, the ostrich-plumed hat on a chair at his side. He holds diplomatic papers resting against a table with carved lion-headed supports of a Pompeian type and bearing on a side panel the crest of the Dukes of Hamilton (to whom Hamilton was related)1 displayed as a badge. To the right a glass fronted cabinet in the form of a Roman lararium (such as had been found at Pompeii), crowned with an acroterial statue of Jupiter and bearing a head of Medusa in relief on the pediment; it contains items from the Hamilton Collection, including an ornate Apulian vase,2 a bronze statuette of Athena Promachos, and a bronze tripod and bowl. Through the window a view of the smouldering Vesuvius.

1 Out of a ducal coronet, an oak fructed and penetrated transversely in the main stem by a frame-saw. Hamilton was the 4th son of Lord Archibald Hamilton, who was 7th son of the 3rd Duke of Hamilton. His mother was a daughter of the 6th Earl of Abercorn.
2 The decoration is shown in reverse; Allan evidently copied the reversed engraving from d'Hancarville’s Antiquités Etrusques, Grecques et Romaines, I, 1766, pl.54 (as first indicated by J. R. Fawcett Thompson, Connoisseur, CLXXIII, 1970, p 252); see I. Jenkins & K. Sloan, Vases & Volcanoes: Sir WIlliam Hamilton and his Collection, exhibition catalogue, British Museum, 1996 (2).