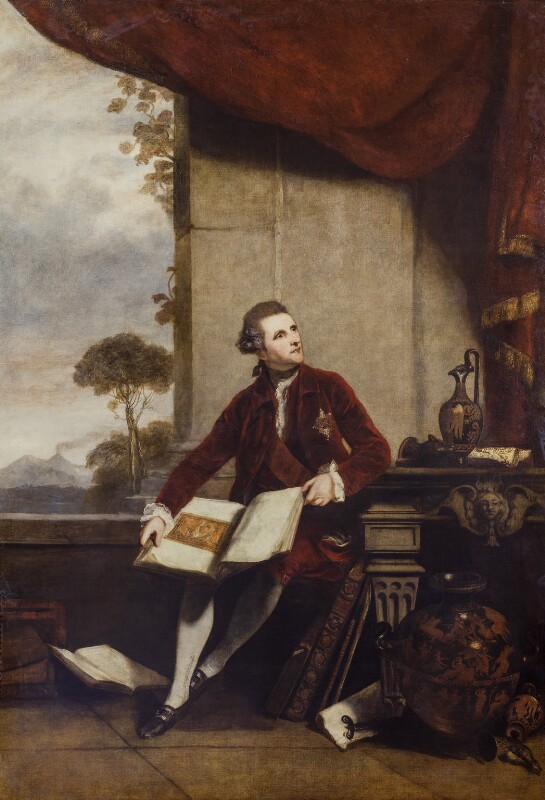 Commissioned by Hamilton with the intention that it should accompany his collection of antiquities in the British Museum, rather than the Allan portrait (NPG 589). Sittings took place during his residence in England from summer 1776 to autumn 1777; there is no sitter book for 1776 but there are eight appointments in June 1777, some of which may have been for the Dilettanti group portrait (for which Reynolds used the same head). In February 1782 NPG 680 was hanging in the British Museum, [1] although Reynolds did not receive his 100 guineas for ‘Sir William Hamilton, Museum Picture’, until September 1784. [2]
Since 1775, when Allan had painted his formal portrait (NPG 589), Hamilton’s achievements as a collector and scientist had been lavishly published, in the first two volumes of d’Hancarville’s Antiquités Etrusques, Grecques et Romaines, and the first two volumes of Hamilton’s vulcanological studies, the Campi Phlegraei. Reynolds refers to these publications in presenting the elegant connoisseur, an altogether appropriate image for the British Museum.
Although catalogued by Davies in 1946 as Reynolds, NPG 680 was subsequently listed in the concise NPG catalogues of 1949, 1970 and 1981 as a studio copy [3] (the size and intricacy of the composition inevitably led to some studio collaboration).
Two related oil sketches, possibly contemporary copies, are recorded in private collections; one the same size as the Hudson engraving, the other exhibited Lady Hamilton 1972, no.29. [4]

Blue-grey eyes, powdered hair, wearing a deep maroon jacket with the star of the Bath and holding open on his lap the first volume of d'Hancarville's Antiquités (open at pl.71 which bears a Greek dedication to Hamilton);1 it is presumably the second volume which lies open on the floor; on the right Greek antiquities from the Hamilton collection in the British Museum: a red-figured hydria, a wine jug, two drinking horns and a bronze sword;2 beside him on the floor stand folio volumes inscribed VLCAN//DIICARA and PRINTS/PASTE.3